As part of her schooling, Sophie did a written report summarizing her time in France between June 30 and July 10th… we offer it up to you as today’s post on AIMLong.ca.  Enjoy!

In Her own Words…

Hi my name is Sophie, and this year I was privileged to go on the mission trip to France. I was one of the 13 people who went, and my friend Maggie & I were the youngest ones on the trip.

While over there we were involved in three places, Châtellerault (Western France), Bordeaux (the Southwest) and Melun
(the headquarters church).

Our first stop was Châtellerault, where we spent three days in the city, prayer walking and holding services. Châtellerault is a church of 20 some people and is also the church we will be stationed at as replacement for the Brochu’s while they are on deputation. During the time we were in Châtellerault a lady came with her friend and we got news that she has continued to come. So the first experience in the city was cool for me, to be able to see the church, meet some of the people, and just get used to the place.

Next was Bordeaux, we spent one and a half days there, and that’s where we did an all-youth service with the youth of Bordeaux on a Saturday night. That night was the day I chose to give my testimony (that was also the night where my head decided to have a migraine it was gone within a couple hours so it was all good). After service the youth took us walking downtown to see some sights and also to go eat. After having a nice meal we started to head back and before we got to the tram, one of the young people from

Châtellerault noticed we had a little problem; we now had one less person. Our friend Nick Cannon had bent down to tie his shoe, saying he’d catch up but had totally lost sight of us. No worries, he was found in about 10 minutes. Once we got to our destination, via tram, we had a five minute walk back to the hotel, and it started to downpour. We got to the hotel wet and tired, but we dried off and had a good night sleep.

We woke up the next morning got ready for church. As soon as the service was over we took pictures with the youth of the church, and headed out to eat. After we finished, we hit the road because we had six hours of driving to get to Melun. The drive was long but with my friends and some hilarious people in the car it made it feel a lot shorter.

The next morning we were going to the headquarters church in Melun (Bro. Nowacki’s church). There we met with the young people for an hour-long prayer meeting to help us prepare for the day. In that prayer meeting a boy from the youth was filled with the Holy Ghost. After praying we went upstairs for some breakfast where we mingled with the youth and got to know some. They brought us outside where they created teams for evangelizing. We handed out invitations to the church, then we went to a square were we sang like a choir. It was really fun too do. Since it was lunch time they took us to a park where we had a BBQ and just had a lot of fun. 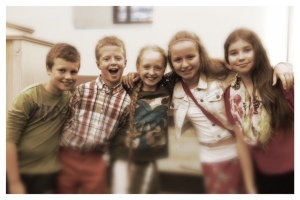 That night we had a service where there was another young person that was filled with the Holy Ghost.

The last day of the trip was dedicated to sightseeing in Paris. It was a rather foggy day but we made the best of it since we were in Paris. We saw a lot of sights and then we headed to the Eiffel Tower. It started raining… then it rained harder. Thank goodness we had ponchos and umbrellas, but our feet were still uncovered. Well, we went to the second floor of the Eiffel Tower and it was nice, for a few minutes, then we were all begging to get down. We had finished that day and now we had to get ready to leave. We got all packed and ready, set our alarms, and slept.

And of all the times for our alarms not to work they decided to not work the day we had to leave. We were scheduled to leave at 8:45 A.M. and our alarms went off at 8:00 A.M. we jumped out of bed, threw the last things in our suitcases and got dressed… all in 45 minutes, which we were proud of.

“I hope to make a difference and help with the growth of the church.
I’m not just going to maintain, but I’m going to see growth.”

What do you think of what Sophie had to say. Want to give her a “shout-out” or a “Kudos”? Leave a comment below… she’ll see every one.

Thanks for encouraging (and praying for) our AIMKids!