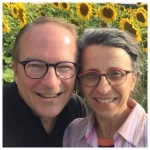 To date, our weather this summer has been more ‘East Coast of Canada’ than it has been what we’ve typically experienced in western France. The past couple of years has seen us suffering from temperatures in the high 30s and low 40s, but this year… we’re pulling out sweaters… even during the day on rainy days where temps between 19 and 22˚C have not been uncommon.

… you, on the other hand, would definitely have reason to complain, given the lack of regularity with my blogging of late. Not sure what is up…. but I’ve definitely fallen off the wagon. Let’s try to climb back on shall we….

Let’s start with our anniversary a couple of weeks ago…

We were a bit limited in our choice of activities given another Canada Revenue tax bill and an impending car purchase (more on that later), but we were nonetheless able to mark the day in a special way.

We spent the day in the town of Montmorillon, about 65km (40miles) away. It’s a lovely spot and wasn’t our first visit, but our first visit in summer and post-covid, meaning that there was more activity.

It’s known for its connection to ancient paper and book-making activities so in addition to lots of old book stores, you’ll find illuminators, calligraphistes, and even a small publishing house.

We spent the day with a local artist and did two workshops with her: a pottery workshop in the morning and a calligraphy workshop in the afternoon, punctuated with a lovely lunch at noon then supper at a restaurant back in Châtellerault at day’s end.

Although I’d learned some calligraphy back in Jr. High School… it was a totally different day for us. No technology of any kind and – especially with pottery – both of us trying something entirely new. We laughed a lot and it was very good to do so.

Even while going to Montmorillon, we were a little bit on pins and needles. We’d recently had the car in for a check (we knew there were several issues) and they’d recommended we not go far with it. Technically, Montmorillon doesn’t constitute ‘far’, but nonetheless… a few extra prayers went up for that commute.

It was going to cost more to do the repairs than the car is worth and we’d already done a couple of pricey repairs in the last 18 months.

Though it’s served us well (we’ve put 180K kilometers on it since 2015) still… we were now faced with the prospect of having to replace it. Fortunately, our meager savings would suffice to pay for a new-to-us 7-seater. It’s also fairly old and with lots of kilometers… but if it can get us through the next 2-4 years, we’ll be satisfied. By then we’ll have a couple other drivers in the house and likely one or two of them will have a small used car of their own… meaning we can replace with something smaller.

Remember a couple of weeks ago we baptized a young man? Well, last Sunday we had the privilege of baptizing his wife!

I got a call from them earlier in the week indicating that she too wished to be baptized and we were only too happy to do so. They remained after church and we pic-nicked together on the church grounds to celebrate.

God is DEF-initely doing something wonderful in the life of this family, who – I’ll remind you – drive about an hour and a half to worship with us.

Later Sunday evening, some other folks arrived in town.

Their goal…. to do some major renovations to our church building that had been long overdue and will help us smooth out certain logistical hurdles with the municipal government.

Dominic, Timo and I helped with some grunt work and Liz & Sophie made sure there was a multi-course meal ready each night. They were long days, but the results were incredible and accompanied by great fellowship.

They’ll be back again this week to finish up the bulk of things. We’re so grateful for their sacrifice!

Interesting sidenote: If you notice the picture of the ‘framed wall’ you’ll note that unlike back home, it’s not framed in with lumber, but tin supports in-stead. There are two reasons for this: (a) lumber is way more expensive here – moreso again since Covid – and typically of a lesser quality than back home, and (b) the tin supports are much lighter to work with.

Finally for today…. Sophie & Timo hopped the train today to head south. They’re going to spend the week with the Bordeaux youth, camping down toward the Spanish border. Dominic was unable to go because he’s finishing up his last week at the bank – his summer student job.

The Bordeaux youth group is like a second family for our kids and we’re so grateful to them for always including them.

We’ll leave things there for today.

Please keep the kids in prayer as they travel and if anyone would like to help us financially, with the extra costs of late here’s a link to our Partner in Mission Form which can be used for one-time donations or monthly commitments.

If you’re already a financial donor… thank you soooo much!

God bless you, from France!