This past weekend saw us in two churches along the Mighty Miramichi River, in northeastern New Brunswick. In this post I’ll tell you a bit about both of those churches but first, let’s look briefly at the history of Pentecost in that particular region.

For anyone not familiar with the  Miramichi River, it flows some 250km through New Brunswick from the Gulf of St. Lawrence and is home to the one of the largest populations of Atlantic Salmon in North America. People come from around the continent, indeed around the world to fly fish salmon in the pools and rapids of the Miramichi.

As “fishermen” were coming to the Miramichi from all over… “fishers of men” were going out from the Miramichi to other parts of the province. During the 1930’s and 40’s, men like C.B. Dudley were planting churches and fanning the flames of Pentecostal revival up and down the Miramichi River.  Two such churches are the United Pentecostal Church of Gray Rapids and The Pentecostals of Miramichi. 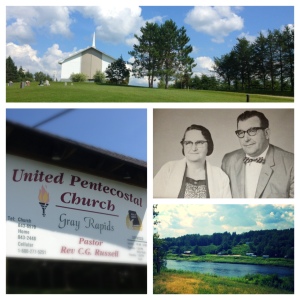 Our first stop, last weekend was to the UPC of Gray Rapids (pictured right) which overlooks the Miramichi and is currently pastored by Rev. Graham Russell. We arrived Saturday night and stayed with Bro. Russell in his home.

I really enjoyed just listening to him talk about many incredible experiences he’s had during his walk with God, as Liz & the kids curled up on the couch beside. It was kind of like listening to your grandpa… and it felt good. I’m glad my kids got to hear such reminiscing about the goodness of the Lord… doesn’t happen like that very often.   The next morning we spoke during their service and are thankful for their great support. 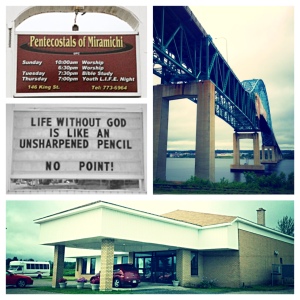 On Sunday, after service, lunch and a short rest, we climbed in the car and headed some 35-40 minutes up the river to the Chatham side of Miramichi City. The Pentecostals of Miramichi is pastored by Rev. & Mrs. Peter Long (no relation… that they’ll admit to anyway).

We enjoyed service together, where God’s spirit did some wonderful things at the altar, followed by a nice meal.

It was special to spend time with the Longs as they were the assistant ministerial team in Saint John some years ago when we were still somewhat new to the church. We had had the chance to work together on a number of occasions for various goings-on and during that time I learned, from their example, a number of things about coming alongside the lead pastor and assisting.

This weekend, we will be headed to Prince Edward Island, another neighbouring Canadian province where we’ll get to spend the Sunday morning service with Bro. & Sis. Hood, in Charlottetown before heading to Summerside to be with the Wicketts.  By the time we’re there, though, we will have time for one more post, so come back on Saturday morning when I’ll bring you up to speed on the overall progress of our fund-raising to-date.

ps. Sophie has been pleased to read your comments concerning her post this past week… Thank you for your support & encouragement!