Yesterday I woke up to an email that blew my socks off, so to speak… but I’ll get to that.

First, let me pick up where I left off last week… on our way south… 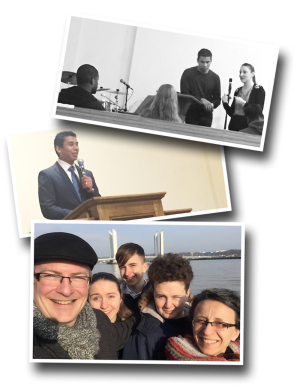 Last week, as many of you were sitting down to read the blog, we were on our way to what is fast becoming one of France’s most desirable cities in which to live. The Majdlings have been there for 27 years and have a well established church.

We went primarily because their youth were having a special weekend with national youth president Samuel Sheikadam and his wife Lisa. Here you can see them teaching a leadership sessions and preaching on Sunday. (But we also had a nice stroll and a Starbucks on the waterfront… who can resist that!?)

The Bordeaux youth completely took our kids under their wing – so much so that after service, Liz & I got to go off on our own for a bit while they all went to Steak ‘n’ Shake.

On Sunday morning there were two people who chose to obey scripture and took on Jesus’ name in baptism and because of this there were many guests in attendance; friends and family of those being baptized.

Can I say that it was really nice to sit back and enjoy service for a change… and to sit beside Liz during service. It doesn’t happen often since we’re usually up front leading.

Lemme just brag on God for a minute.

Years ago, the Majdlings purchased an old, stone garage, with a small adjacent lot, that they renovated and turned into the current church. At the time it was in an old, rather industrial and somewhat run-down part of town… but still within walking distance of the downtown core.

Over the past several years the city has been renovating the area and has build thousands of apartments. They eyed the land that the church was on and wanted to include it in their municipal plan but Pastor Majdling wouldn’t sell.

“You’re putting in thousands of apartments
and all of those people need a church”
he told authorities.

Long story short… the city is building them a brand new church, a one-story parking garage on street level with a terrace above and housing them at no charge during the construction. IN-CREDIBLE! God is using the city to bless the church as much as the church is a blessing to the city. This is just one of the cool things that God is doing in France.

Remember a couple of weeks ago I mentioned that God had put on the heart of one of our church members to place bibles in some of the local “Book Boxes” in the area? Dominic & I dropped off another couple this week in two more book boxes that we found – including information on how to contact us if they desire follow-up.

Essentially, they are community-based book exchanges where people leave a book and can take a book. They can take different shapes:

Incidentally, the second was just across the street from this 15th century castle. It’s just 20 minutes away… but we didn’t even know about it. Castles (of varying sizes) are just about a dime-a-dozen in this region. 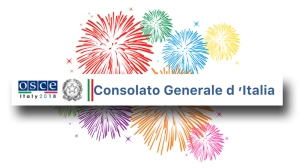 Well I didn’t see THAT coming!

Anyone remember me telling you about making a number of visits in Montreal & Ottawa back in June 2014 for the purposes of finalizing my application for Italian citizenship?  (It involved RACING through Montreal to meet near impossible deadlines after a last-minute error was discovered in the translation!)

The goal – at the time – was we thought it might facilitate immigration procedures upon arrival in France. Little did we know that it would be nearly a 4 year process. I wouldn’t say I forgot about it but….. you know. Yesterday, however, I got word that my citizenship application was approved and I have to coordinate final formalities with a consulate here in France.

I’m thankful that the Lord still acts on prayers that have been prayed in the past… even when we perhaps forget about them or stop praying for them as regularly. God is faithful!

Maybe today is the day you need to pick up an old prayer request… something that you once prayed for regularly but which has fallen to the wayside a bit. You never know… he might still be working on it. His timeline and ours are not always the same.

God bless you today & thanks for stopping by.
Now… Go pour yourself another cup of coffee and dust off that prayer!