In less than one month, we’ll be back in North America. It seems a bit surreal and now that we’re under the 1-month mark… things are kicking into a new gear…. somewhere between two -ICs:

I’ll get to some of the preparations… but let me tell you about week T-minus-4:

Again this week we headed down to the bottom of the church property to work on the hedge, taking advantage of the boys’ second week of school vacation. 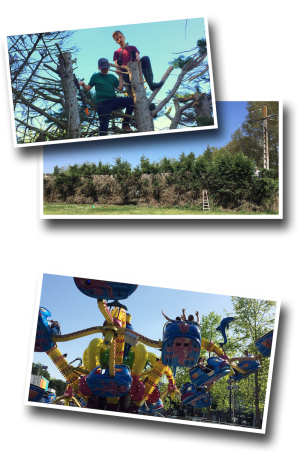 The straight brown line across the top is where the majority of the hedge dried up after a terrible “trim” job before our arrival. The power company had it hacked down to protect overhead powerlines. It didn’t kill the hedge completely… but almost.

There are, however, areas where side-growth is 2-3m above that line. We wanted to trim it back in an effort to:

The goal is to save the hedge (to hide a junkyard on the other side)… It’s a slow going process, but we’ll see how it goes.

You know what they say about all work and no play… Well, the fair is in town so after a couple days of hedge-work, the boys spent a few hours unwinding at the Spring fair. 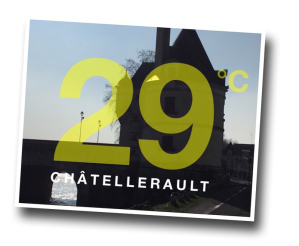 After complaining about the still-cool temps last week, the weather has made a clear about face, as this week we’ve seen several days of 28-30 degrees.

If you’ve seen snow or ice this week (as I know several Canadian cities have)… I’m sorry. The downside here is that Dominic has already mowed twice here at the house and Timo spent last Saturday afternoon mowing at the church.

Have you ever used the YouVersion Bible app? Well, a long time friend is publishing a series of devotional thoughts on there and asked for our help in translating them… me into English and Liz checking an Italian translation that was previously done. Just a small project, but pretty cool!

Once we’re back in Canada, Liz will be beginning a book translation project with The King’s Translators, headed up by Liane Grant in Quebec… that will be her “summer down time” project.  🙂

Here’s a look at some of the preparatory things that are going on in the lead up to departure:

In the midst of preparations, we’ve seen the Lord’s hand of provision and we are grateful!

I’ll leave off today’s post the way we finished off the week, last night… kicking back around the bonfire. Dominic pulled out his guitar & we played charades in the warm night air (fear not Canada… it’s coming your way too! 🙂 )…. a perfect way to close out a busy week… God’s blessing!