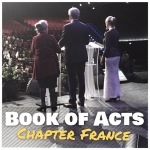 As promised last week… I’m going to tell you about Pentecost Weekend in France. Today I also get to tell you a bit about #AYCFrance19 and about an old friendship that’s also written the first words of a new chapter.

Let me begin with last weekend, since that’s where we left off.

Last weekend was Pentecost Convention here in France. It’s one of the two major conventions each year (along with Youth Convention in November). We were supposed to have Rev. & Mrs. Anthony Mangun (Alexandria, LA) with us, but due to two tragic deaths in his congregation, he had to pull out at the last minute.

God always has a plan however and nothing takes him by surprise. Just a few days before, Missionary Nowacki called Rev. David Trammel (District Superintendant of Michigan). His response, upon hearing Pastor Nowacki’s voice…

“You know, the Lord put you on my heart heavily this morning and I was planning on calling you later today.”

This wasn’t just any convention – it was the 40th anniversary of the Nowacki’s arrival in France. They began with very little and have built up a thriving local church, network of churches and Bible School during that time. Since the book of Acts was never really closed… we took a look back at all that has been, up to this point, “Chapter France”.

Liz & the kids and I are so privileged to be part of what God is doing here and can’t wait to see, in years to come, what will get written, specifically, in “Chapter Châtellerault”.

Following service on Sunday, Liz was staying an extra day to help out as a judge for the National Bible Quizzing finals. We headed back to Châtellerault, but before we did, we got to hang out with Maike for a couple of hours.

Her dad was best man at Liz’s & my wedding. The last time we saw Maike, she & Soph could BOTH fit on my back at the same time… they were so small. Now she’s working as a nanny for several weeks, not too far from Melun.

So. Nice. to hang out for a bit. God’s blessing of friendship is being extended to a new generation.

This morning, 37 incredible, missions-minded young people will get off a plane at Charles-de-Gaulle airport and will spend the next 10 days or so discovering the United Pentecostal Churches of France: holding special services, prayer walking and evangelizing and encouraging.

(we accompanied #AYCFrance2015 as well, you may recall)

They’ll spend today and tomorrow in the Paris region before heading to western France on Monday. Liz & the kids and I will accompany them for that leg of their journey – guiding and interpreting for them at our church in Châtellerault, in Bordeaux and in Bourges.

I did a bit of field work this week in preparation for their tourism day visiting Chenonceau Castle as well as the home & workshop of Leonardo DaVinci (Le Clos Lucé).

You can imagine how laborious it would be for me to have to do leg-work in Chateaux…. It’s nasty work, but someone has to do it. 🙂

See that third photo… of two rose bushes at the head of vineyard rows? Do you know why it’s common to see roses placed like that?

Many of the pests and illnesses that commonly attack grapevines also attack roses. So not only is it aesthetically pleasing to have rose bushes in a vineyard, it’s also precautionary. If the owner sees that the roses are beginning to suffer, he can “nip it in the bud” so to speak, and correct the problem before it begins to affect the grapevines.

Quick update on the bees…

(just ’cause I think they’re the coolest).

The last month or so has been cool and wet, meaning that the bees have consumed much of the nectar they collected during the main Spring nectar flow (heavy blossoming period). That means limited (if any) honey for us … but it’s dried up enough this week for them to get out onto the linden trees that are in full bloom.

Aside from that, they’re doing well and I have 3 new colonies that I split off from the initial colony (trying to increase the chances of a bit more honey next year). 🙂

Wondering if you could keep the following in prayer this week specifically:

Please let what you read, inform your prayers for us and for France.
We value your support.