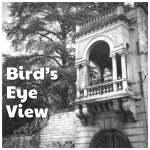 With all of the drone footage available on the web – through social media, news broadcasts and the like – it’s easier than ever to get a bird’s eye view of places and events.

Even if you’re looking at aerial footage of a familiar place, however, it’s not uncommon for it to take you a moment to situate yourself or identify the place in question. Why is that? … It’s because we’re used to seeing it from a different point of view (P.O.V.) and the view from above is unfamiliar.

I was reminded of all things P.O.V. this week and I’ll tell you more, but first, let me dive into the week that was, here in France…

A huge series of old industrial buildings in our city is known as “La Manufacture” (The Manufacturing [plant]). It was originally built to manufacture swords, sabers, bayonets and other arms for the French army.

It ceased all manufacturing work a good number of years ago but still houses a museum, a music conservatory and various government training & development offices.

Last past weekend was it’s 200th anniversary and they celebrated it in style.

We all watched the fireworks show from a nearby bridge. There was also lots of music, but as I age I find less and less appealing the thought of being in the middle of a large, loud crowd – hence our perch on the bridge.

(Final photo by Châtellerault instagrammer Florie Doublet who was in the middle of the crowd. What a great up-close shot of the chimneys! These are the same chimneys from which we prayed over Châtellerault with the #AYCFrance19 group, back in June.)

It seems like there are always admin details to be worked out, whether for French, Canadian and (most recently) the Italian government.

CANADA: You may remember that the kids all had to renew their Canadian passports before going home in June. Then there were Revenue Canada formalities to complete.

FRANCE: This week we had to get some French ID for the boys, which meant a trip to the Prefecture. It was surprisingly efficient and we walked out with the documents the same day (unheard of).

ITALY: The next step is to renew Italian passports for one more layer of European ID (this proves that they have the right to be here). I’ll be applying for my first Italian passport, which means that future residency interactions with the French government will be more streamlined. We were able to make appointments for that and will travel to Toulouse next month to begin that process.

It seems there is always something and God bless Liz… she is the wizard for all things admin!

First this really lovely balcony that we saw in Poitiers this week when we were going for the boys’ ID. It sits atop a wall overlooking the valley below.

Can’t you imaging yourself up there… leaning on the balustrade, taking in the view? I very easily can. High vantage points allow you to take in a maximum of information… and sometimes we really want/need that!

Secondly… I’ve really been pining for a bird’s eye view / understanding of things this week. On Tuesday we took our car in for a fairly routine check-up but we won’t likely get it back until next week. A series of things needed to be repaired so we’ve been rental-carring it since.

On one hand it was neither surprising nor upsetting. Overall, the car hasn’t required much in the way of maintenance so I suppose we were due. On the other hand though, the bill will be significant, so we swallowed a little extra hard as we said “OK Lord, one more opportunity to see your provision at work.”

An he didn’t take long to partially meet the need. This week alone I’ve been offered extra teaching hours that will cover roughly 1/2 of the bill. Some of that money won’t come through until after Christmas… but it’s on it’s way.

The other neat thing, in the process, is a neat first contact with a young man who works at the dealership. Someone who I’d seen before but never dealt with directly. We’ve exchanged several times now and it’s been very positive.

Working in missions has taught me an awful lot about living by faith. It’s definitely NOT always easy and I still have lots to learn, but I’m thankful for what God’s teaching us as a family.

For stopping by today. May God grant you bird’s eye view glimpses of your situation this week. If you’re experiencing difficulty, may he allow you to see it from a different point of view.

There is opportunity in the midst of what we see, on the outside, as adversity.