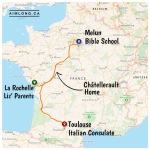 Since last Saturday, our little Peugeot 407 wagon has clocked nearly 2,000km (1,200 miles), and have gone from the deep south, to the near-north of the country.

I generally love to drive and don’t mind letting the others relax, but when I got to sit back in a non-moving armchair for part of the day Thursday, I wasn’t disappointed! 🙂

Here’s a quick run down of the cool things that happened this week.

Things went much more smoothly for Liz’s parents’ departure than they did the previous week for their arrival. The early morning road-trip was quiet as we gradually “came-to” and the sun was shining for their return trip.

We were glad for the time they were able to spend with us.

Can you believe that when you book in advance, you can get round trip tickets for less than 20€!? Amazing!

This was our first ever trip to Toulouse, the center for French aviation and home to the Airbus Group.

The 500km trip was a quick one: down on Monday & back Wednesday.

The reason: it’s the Italian consulate that looks after our part of France and we had to (a) renew Liz’s & the kids’ Italian passports and (b) I was able to apply for mine – first time.

It’ll be weird. I’ve never had anything but a Canadian passport, but this will make residency here in France even easier than it already is for me.

We saw God’s hand in the process. The lone office staff member (others were on vacation) was up to his ears in work and was easily frustrated by those who arrived with no appointment. Yet with us, he went over and above, for both our Tuesday & Wednesday appointments (we couldn’t get 5 on the same day). Not only did he get us done hours before we expected to, but he did it with a great sense of humour and wit… he couldn’t have been more accommodating!

A Near 2-hour Wait

It’s perhaps ironic, but our longest wait was not at the consulate, but at the Entrecôte restaurant. We hadn’t been to one since 2014 in Bordeaux so to find there was one in Toulouse was a treat.

It’s not your average restaurant… here’s how it works:

#1: Everyone gets the same meal (salad, steak & fries), your only choice is (a) how you want your steak cooked and (b) if / what you’d like for dessert. But they have a secret steak sauce that keeps people coming back for more.

#2: No reservations… it’s first come, first served. So it’s common for people to begin lining up at least an hour ahead of time. When it opens (at 7:15pm) they serve as many as the restaurant will hold, then the rest continue waiting until space gets freed up.

We were the first in line that night… it was a rare treat & it was worth it! We had a window seat on the 2nd floor, so we could keep our eye on the line that continued to snake around the restaurant as we ate.

The third (& last) trip of the week was up to Melun for Bible School. As I’d done in August and September however (when Soph & Dominic came with me), I brought Timo along for his own special day in Paris yesterday (I teach today).

We didn’t get everything done, from his wish-list, but we got a couple…

Sacré-Coeur’s Artist Quarter:
Timo wasn’t particularly keen on doing the stairs to the top of the dome (like I’d done with Dominic), not to mention it was a foggy, drizzly day so visibility was poor. We did do the initial stairway up Rue Foyatier however and he got a caricature done in Place du Tertre. He was very pleased with the result.

1950’s-Style Diner:
There are a few of these around now… it seems to be a bit of a fad, and we found one just around the corner from the Garnier Opera. He had a huge burger and a milkshake.

We didn’t get to do any electric scooters, mainly because of the weather and the early nightfall now that the time has changed (last weekend) and he would also have liked to get a nutella-filled crêpe, but after the hamburger… there was nary any room left! 🙂

It’s nice to be able to spend time with each of the kids on their own from time to time! We have great kids!

On our last morning in Toulouse, I was walking Pollux early and came across a monument dedicated to the memory of those who had died during the 1870-71 Franco-German war.

It’s a beautiful commemorative statue in its own right, but I was most struck by the inscription on the back.

Beneath the city’s coat of arms is the inscription: “Agnus Dei Dona Nobis Pacem”, Latin for “Lamb of God, Grant us Peace”.

It’s truly amazing to me how much public discourse has changed since that inscription was made… certainly in France, where any mention of God in public, political discourse is unheard of now.

“Lamb of God, Grant us Peace”

…but it starts with the Lamb of God.
If we’re not at peace with God, it’s difficult to feel the peace of God.

How do we get to be at peace with God? Everything we need to know about God is revealed to us through Jesus and through his word… “He who has seen me has seen the Father.” he said.

“Lamb of God, Grant us Peace”
…grant my friends peace,
this week.