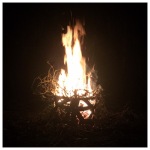 Good Saturday morning to you. The sun is up and there’s a pair of mourning doves nesting in the pine tree out front… their cooing is easing us into the sounds of the day which will soon become cars going by and yard equipment humming.

Spring is still undecided and our temps have gone from 18˚C on Wednesday to 9˚ yesterday (60s to 40s˚F). However, it’s dry enough to get a good start on Spring clean-up, and a few other things that made up our week.

Mimosa Season is back…

We have a neighbour who makes sure, every year, that we can bring the scent of mimosa indoors.

The tree you see here is just outside one of the schools where I teach, in Angers. It particularly stands out against the grey building and the green lawn. As you can see… when the thousands of little flower-balls are fully open, it is a brilliant, vibrant yellow.

The smell is lovely too… particularly when it’s brought in the house accompanied by the gift of friendship. I can’t tell you how the Lord has blessed us with our neighbours.

Speaking about neighbours, just down the lane, on the other side of a grassy lot, there’s a couple whose grand-daughter is in one of my English classes in Poitiers and she told me her grandparents think we’re adorable.

Of course it’s nice to be well thought of, but there’s something else. You know those small connections that you make, in a community, when you’ve lived there long enough? That’s what this felt like… it was like a little extra dose of belonging.

I said that we were all mixed up and while that may be true on a number of levels, I was actually meaning it on a more practical level.

The church in Paris Center recently upgraded their sound system because it no longer met their requirements. Since it still worked perfectly, they decided to bring it to us as a gift.

Since our arrival here, we essentially had an amp with two cord jacks, and in our relatively small space that bare minimum gave us the ability to amplify the keyboard and a microphone. This new configuration allows us to add cordless mics to the mix as well as hearing Sophie singing from the keyboard and gives Dominic the ability to plug his guitar in as well.

It may seem like such a basic thing to many of you in bigger churches, but this has really made an impact on our sound and we’re grateful.

It was nice on Thursday to be able to take some of branches I’d picked up around the yard and throw them in the fire-pit. It wasn’t warm per sé, but it wasn’t cold either, like a true Fall / Spring evening.

It took a while to get it going actually… a lot of fanning embers, getting enough oxygen on them and coaxing them into flame, but as you see… we eventually got there.

It’s a good metaphor for things here spiritually… lots of fanning & coaxing. There are weeks when it feels like there are more embers than flames and other weeks when the opposite is true.

When you pray for us, you never know what kind of week it falls on, but I’m convinced… when the Lord puts us in your mind or on your heart and you think of us for whatever reason, and when you join a prayer to that thought… it’s perfectly timed.

So keep praying… for us and for the others that the Lord puts on your heart.

God bless you today and thanks for visiting!