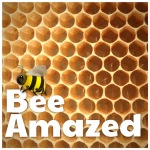 Have you ever seen honey-bee eggs before?

If you look closely at the feature pic associated with today’s post, you’ll see what look like little, white grains of rice at the bottom of the cells of the bees-wax comb. Those are bee eggs.

When I think about them, I’m amazed at God’s creativity.

Let’s take a quick look back at the week…

I’m still a bit amazed by the weather that we had in April, which seems to be continuing into May. At the end of March we had temps in the high 20s (80s), but since then we’ve struggled to hit 19-20 (68˚F). What’s more, we had virtually no rain for the entire month. It doesn’t bode well heading into summer.

They’re only spots of colour in a big yard, but little by little I’m trying to expand that. Soon the Pierre de Ronsard rose (Eden Rose in the USA) will be in bloom in the doorway and it will be a sight to behold.

One of the nice things about the cooler weather is that it’s put a damper on the ant population, meaning that our artichokes had a fighting chance this year. Last year, the combination of aphids and ants did in the fruiting stems before they could produce. I’m not particularly a fan, but it’s something from Liz’s childhood, which is why they’ve found a home in the garden.

One of our pigeons has started laying eggs and since we’re not looking to grow our population at this point, they’ll find a home in the fridge, before attending an ‘omelette party’! 🙂

Timo will be taking over the lawn-mowing duties in Dominic’s absence. He did it from time to time last year, but is glad to have a chance to earn a few extra euros from time to time (it’s VERY difficult for teens to get part-time jobs here, as they would back in North America).

Well, last week saw the end of classes for me at the University of Poitiers. I teach English to all four groups of first year students in the Performing Arts programs. It’s not a grammar course (it’s assumed that they’ve been taught the grammar through high school) but rather a ‘put English to work in the context of your studies’ course, or put in Nike-ese… Just use it!

On one had that’s fairly simple because, as cinema / theater students, they’re used to watching shows / movies in English (there’s a greater choice on Netflix). This makes my job easier. My goal, as much as anything is to help them gain confidence in trying, because if they’ll try… try… and try again… they’ll learn.

This was a particular year because of COVID and distance learning. It presented a fair number of challenges and so my ‘job’ (unofficially) also entailed moral and emotional support by times. After classes ended, I received a number of very poignant messages from students indicating that my class was the one thing that kept them from dropping out or that I was the only prof who treated them as human beings, not just students (amazing that they’d make the nuance).

It is always my goal to show Christ’s love & compassion to students. Such messages tell me that they recognize the difference.

Book Project with the Students

In one class, I’d asked them to write 7-sentence stories about ‘the tree’. Long compositions can be intimidating and even the weaker students feel that 7-sentences is doable. We then used those stories as a base for discussion around common mistakes, how to correct them, how to write concisely and tweak for improvements.

Afterward, I had a thought. How about give students a happy exclamation point at the end of a very difficult year and offer to publish them – for those who wished. It was a unique proposition and one that they jumped at. As a result… in the next week or two, we will be publishing a collection of just over 50 micro-stories written by my students. It’ll be available on Amazon & I’ll share the link when it becomes available.

I’m very excited for them.

If you follow me on Instagram, you will have already seen the feature pic where I described my amazement when looking into the bee hive.

Here you see the bees on a comb with different types of pollen as well as some nectar. In the bottom picture, you’ll again see some bee eggs at the bottom of the comb cells.

It reminds me of the creative God that we serve:

“The heavens declare the glory of God; and the firmament sheweth his handywork.”
Psalm 91.1

For since the creation of the world God’s invisible qualities—his eternal power and divine nature—have been clearly seen, being understood from what has been made, so that people are without excuse.
Romans 1.20

It’s important to be amazed… to experience wonder…. and it’s even better to know the source of that wonder… Jesus, through whom all things were created.

Have a great week and thank you for stopping by.
May you be amazed by the Lord this week.