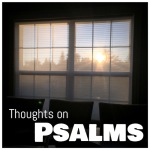 Psalm 3 is a little shorter than yesterday’s psalm and reading it this morning was like a breath of fresh air because it feels so spot-on.

Let’s get into it…

3 But You, O Lord, are a shield for me,
My glory and the One who lifts up my head.
4 I cried to the Lord with my voice,
And He heard me from His holy hill.
Selah

5 I lay down and slept;
I awoke, for the Lord sustained me.
6 I will not be afraid of ten thousands of people
Who have set themselves against me all around.

7 Arise, O Lord;
Save me, O my God!
For You have struck all my enemies on the cheekbone;
You have broken the teeth of the ungodly.
8 Salvation belongs to the Lord.
Your blessing is upon Your people.
Selah

Feeling overwhelmed by life or people?
There’s a place of refuge in the Lord that allows for rest, confidence, hope and restoration;
a place where you can regroup and regain the strength you need to face the day.