I will refrain from giving too many details, but suffice it to say that it’s been a long time since I’d been mortified. I got reacquainted with the feeling earlier this week, but happier things first…

The highlight of which for Timo was getting to work with a chocolatier and make his own chocolate creation… for only 5€. He chose his base (milk chocolate) as well as a number of decorative garnishes (teddy bear, race car, leaves & lady bugs) and cemented them to the base using chocolate. It went into the fridge to firm up a bit and we got to take it home when we’d finished making the rounds.

Liz, too, got a little spoiled because we managed to find a few cheeses and an olive merchant as well. 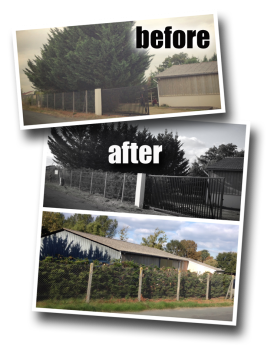 Well, I promised it to you a little while back, and here it is:  a “before & after” pic of the hedge at church. It had gotten out of control long ago and being along the front road, really needed to be done.

Together with 2 other men, 2 chain saws, several afternoons worth of work and a couple of trips to the hardware store to sharpen the chains… we managed to tame it. The “before” pic shows a good 25′ (8,5m) of tree height with a span of roughly 11′ (3,5m).  The “after” pic shows the hedge trimmed down to the same height as the chain-link fence.

What a HUGE job!  Thankful to the Lord for his protection while getting this done!

This week we also had two very special visitors as Liz’s parents arrived from Belgium.

Although we’d seen them twice since coming (albeit for very short visits each time) this would be the longest visit not to mention their first time in our neck of the woods.

They got the guest room meaning that Sophie bunked out with the boys (you can see a picture of what the kids’ room looked like) and among other activities & time spent together… Timo learned how to make home-made pizza with his Nonna (grandmother in Italian).

Very good to have them with us!

Last night we had a good evening with our neighbours, who came over for tea and dessert. These are the neighbours that we’ve connected particularly well with.

So with all the positives… why on earth entitle this post “Mortified”?  Because of the way the week began.

We’d been having plumbing issues last week which led to the garage being partially flooded, twice, and it wasn’t rain-water.  The pipe which carried away all  used water had become plugged meaning that nothing was going through… not water from the bath tub, the washing machine, the sinks or…. the washrooms.

God bless the plumber who came to resolve the situation. He checked the drain (through an access point in the lawn). As he he began unscrewing the lid, all that had been backed up began to overflow the access point… at least 15 gallons worth.

Someone needs to invent pipes that don’t clog… that’s all I’ll say. Once again, God bless that plumber!

Finally… Canadian Thanksgiving was last weekend so we’re taking advantage of Nonno & Nonna’s visit to have a Thanksgiving dinner together later today. We couldn’t find a Turkey (they’re really only somewhat common here at Christmas) so we’re going to have chicken in stead.

Interesting fact: When you buy poultry at a local market (whether duck, chicken, quail, etc.) it’s not uncommon for it to be “intact”: meaning that the head and feet are still attached… so you’ll know you’re getting the real thing. It takes some getting used to, and I’ll spare you the picture. You’re welcome. 🙂

If you could pray for ONE thing this week, it would be for our youth. There are a couple of them that are asking million-dollar questions about God and tomorrow, Bro. Kabasele will be speaking to them on the oneness of God. Pray for wisdom and understanding among our youth!

Thank you for visiting, God bless you today!