I think it’s fair to say that, with the exception of taking down the Christmas Tree… this was the week that we officially “wrapped up” the holidays. Today I’m teaching at Bible School but here’s the rest of our week. 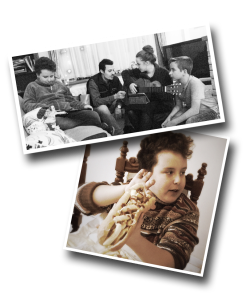 On Monday morning, we packed up the car and headed north. The first 3.5hrs got us as far as Melun where we dropped off Jacques, our “over-the-holidays Collie-dog“, after which we drove another 4hrs or so to Belgium where we spent a night with friends before surprising Liz’s parents – who did not know we were coming. Liz had prearranged it with her brother. They were well & truly surprised!

While there, the kids got to eat “mitraillettes” which they love! Why are they called mitraillettes (which means “machine guns”)?  Lemme explain how they’re made & you’ll understand why:

Voilà!  …another Belgian treat.
(besides the more commonly known waffle) 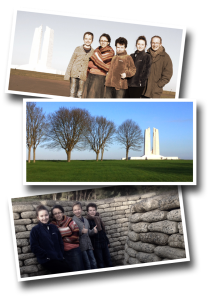 On our way home from Belgium, we took a 30-min side trip to see the Canadian Memorial at Vimy Ridge, commemorating the 60,000 lives lost during WWI. It’s one of those places that I think every Canadian should see at least once.

More often than not, Canadians are seen as understated on the world stage, but this sprawling monument of grand proportion defies that stereotype.

It was Canada’s victory on this critical battlefront that established Canada’s nationhood on the world stage… it was no longer just another British Colony.

The last photo above is one of Liz and the kids in some of the trenches at Vimy Ridge. It’s a fitting image of how we see ourselves here… in the trenches & on the front lines. We see the fighting in the spiritual realm around us, we stand just as much chance at seeing shrapnel fly by as we do to take new ground.

We, just like you, are in a battle… Lord help us to maintain the ground that has been won and to follow your direction to take new ground as well.

The UPC of France is joining with UPCI churches all around the globe in making the month of January a month of prayer and fasting in an attempt to refocus our attention on the Lord and on the building up of his kingdom. The theme of the month is: Follow… for if we will follow the Lord Jesus, growth with result: personal growth and church growth alike.

As I mentioned last week, we need to renew and expand our financial base as we look forward to the Brochu’s return in March.

Also… if you’d like to receive our two special eBooklets (Top 15 in 2015 & Building Engaged Youth, Building Missionaries, through Short Term Missions), Click Here. I’ll send them to you immediately when you subscribe to our monthly newsletters.

Thanks for stopping by today. Let all that you read inform your prayers for us and for the work in France.