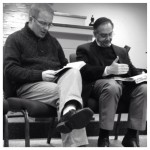 Last weekend was a great weekend in the Paris region. We spent Saturday with many of the other national pastors, Sunday with one of the international works in downtown Paris and Wednesday-Thursday with 42-year missions veteran Rev. George Craft. We were blessed and were able to bless others as well: Such is the daily challenge to you as well.

Saturday was a day of national meetings during the morning (*think “church annual business meeting” but on a national scale*) and a pastors & wives seminar in the afternoon, it was during this session that we met, and helped translate for, 42-year veteran missionary George Craft (Regional Evangelism, Europe).

The session that I translated was the one from which I take the title for today’s post… for it was the theme of that session. Briefly: In order to expect families (or a family-like body) to be healthy, three things must be present:

This was great teaching… applicable on both family and church levels.

Sunday morning, we headed into Paris by car to preach and sing at the church in Ivry-sur-Seine, just minutes from downtown. Service there takes place in English and although I’d been there several times already, Liz & the kids have never been.  They were just as excited to experience an English service as the church people were to finally meet the rest of the family.

The local team led worship, but Liz & the kids sang a song just before I preached. The church folks were SO BLESSED by their ministry. As soon as service was over… they all wanted a photo together. They served us lunch and the kids met some other children their age as well.

Since we were already only about 10min from downtown, we took a couple of hours after church to go for a walk & grab a Starbuck’s.

We parked near the Louvre and took a walk through the Tuilleries Gardens where we took a few photos, Timo got a new souvenir for his collection, Dominic got a Candy Apple (“pomme d’amour” or “love-apple” in French).

It was one of those catch-all weather kind of days… some sun, some cloud and a brief rain shower thrown in for good measure. That being said, it was pretty cool at only around 9 degrees (48 fahr.) and with a healthy breeze blowing. It was nice to just “stroll” as a family – we thank the Lord for such moments together.

To warm ourselves up afterward, we headed into the Starbuck’s location under the Louvre. Ohhhhh…. heaven!  As I mentioned last week, it’s a real treat… so each sip was savored!

Getting into Paris that morning was relatively easy… Sunday morning there is little traffic. Sunday afternoon, however, is another story altogether! It took us the better part of an hour to get from the Louvre out to the ring-road (only a few km) which would then take us to the highway home. 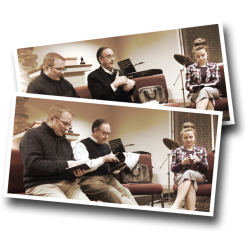 Bro. Craft made a stop in Châtellerault to teach in our mid-week service since he was on his way to meetings in Bordeaux for the weekend. Although it wasn’t the core of his message, he again reiterated the Trust, Talk & Touch thought, before moving on to speak on forgiveness. I know I said something similar only a couple of weeks ago… but this past Wednesday was the best mid-week service that we’ve had to date. The worship was great and there was a incredible move of God’s Spirit during the time of prayer afterwards. Thank you Lord!

Rather than putting him up in a hotel, we had him stay in our home. It is always a blessing to create opportunities for not only us, but also our kids, to connect with servants of God. There were several moments where he ministered to us as a family.

After 42 years as a missionary in Europe, he’s seen and experienced a lot, so he was very encouraging and affirming to us “newbies” with both our hopes, our ignorance & our questions.

This has been our week in a nut-shell. Perhaps the one thing left to say is this:

Thank you for your support!
God bless you & yours today!