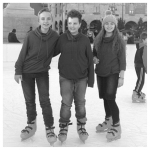 On one hand, I’m at a bit at a loss for words as I begin today’s post. Looking in from the outside, it could appear that not much has happened in terms of “ministry” and I find myself almost feeling the need to be apologetic for the lack of any tangible “results”.

…then I stop to give my head a shake. Ministry, especially ministry as a family, isn’t always about producing. I know that and you know that but sometimes it’s easy to forget… or we just get caught up in a rhythm that overtakes what we know that we know.

To neglect the need for retreat & refocus… to simply ‘be’ together, strengthening the most important relationships we have or will ever have, is critical… and all to often overlooked.

Not us and not this week.

As a family we’ve temporarily extracted ourselves from the daily grind – something that had been in the works since last March. We took the boys out of school, Soph left most of her schoolwork back in Châtellerault and we “got out of Dodge” for a few days.

(It’s funny, as a Canadian, to watch Europeans ice skate. For the majority of them it’s a bit of an awkward exercise… and some of them are awkward while dressed to the nine’s. But I guess I can only say that because I grew up ice skating on the pond all winter from a young age!) 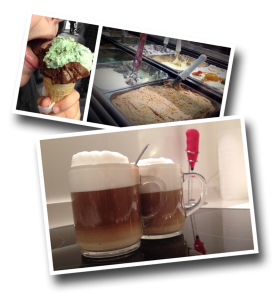 One thing about Europe: In just about every city center, there’s an ice cream shop selling gelato… a type of ice cream which I assume originated with the Italians (because they named it ‘gelato’), but which just gets called “glace artisanal” (homemade ice cream) in France.

*Some gelato may or may not have been consumed in the making of this photograph.*

For Liz and I, free-flowing coffee was the treat. Give us some good ground coffee, an Italian espresso machine, some milk, sweetened condensed milk and a milk frother (in red) … and we’re good to go! 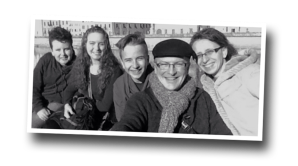 It did us good to get away. I’m not sure that we return to Châtellerault completely rested, but they do say that a change is as good as a rest.

By the time our mini retreat comes to an end, we’ll have gotten to spend a few days alone as a family as well as a bit of time with friends that we’ve not seen in 18 years and 10 years respectively; friendships that were made in the context of Christian ministry.

I’m thankful for the ability to “push pause” every once in a while. It really does make a difference.

How are you “pushing pause” as we  lead up to the Christmas break?

Thanks for stopping by today, I appreciate your visit.
Please remember to let all that you read, inform your prayers for us and for France.