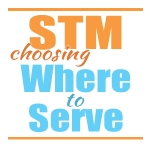 I was recently asked a question and thought that the answer might benefit others who find themselves confident that God is calling them to short-term missions involvement, but they’re perhaps not yet quite sure where.

I’m applying for short-term missions. Do I indicate the country that I’m feeling or is there only a list of certain countries that the organization is recruiting for?

There are two possible scenarios that I could see, which would lead to completing the application in different ways. I’ll touch on both and then come back to the question at hand.

Scenario #1:
You’ve got a clear call… indicate it!

In this scenario, not only do you know that God is calling you into missions but you already have an idea where, because…

If this is you then know that Question 4 on the downloadable AIM application gives you the opportunity to indicate the place(s)* for which you feel a call.

* if there’s just ONE place to which you feel called, simply indicate that one place. Sometimes multiple places are a possibility where God calls you toward a specific cultural or linguistic group which could be found in various spots:

eg. You’re called to work overseas with the Spanish culture but are unsure where.
You could fulfill that call in Mexico, Spain or elsewhere in Central America.

The next thing I would do , if you’re feeling toward a particular place, is connect yourself to that place. If the missionary has a Facebook page, profile, website or blog, familiarize yourself with what’s going on there. At some point in the interview process you will be asked about your familiarity with the work.

Finally, pray for that country, the work, the missionary, etc. God will prepare you for a more seamless transition to involvement in the work there should your application go through.

Scenario #2:
There’s a clear call to MISSIONS but not to a PLACE!

It’s also perfectly legitimate for you to feel a pull toward missions involvement but without a particular calling to a specific spot at this point in the process. The call of God is something that CAN be instantaneous, but isn’t always. In my case it was very gradual and clarified over a number of years.

In the late 1980’s, as a teenager, I wanted to do a 2-month missions trip and my choice was between Belgium (French-speaking Europe) and Bolivia (Spanish-speaking South America). In the end my decision was strictly pragmatic: I already spoke French and did NOT speak Spanish so I knew I could be more effective in Belgium.

That set me on a path of involvement in French-speaking Europe… where we still are today.

If you’re early on in the process and aren’t sure of a location, I’d suggest you check out the AIM2Go website’s Job Center. There you’ll get a “first glance” of some of the AIM possibilities out there along with preliminary details. Something may catch your eye.

In the case of the question that prompted this post… the person indicated that they were feeling something. The answer is clear. Proceed with applying for the country that your feeling for. The application process will make clear the path, through discussion with AIM2Go and Global Missions staff along with your pastor and district leadership.

The main thing is… Apply!
Begin.
… and see where God takes you… It’s a great adventure!

Thank you for stopping by. God bless you in the process of unwrapping the call of God for missions in your life. If you have any questions…

You’ve got a plan and a destination and you’re expecting great things.
One of the things that will help you make the most of you STM experience will be knowing some of the potential pitfalls as well. I’ll give you seven which, if you can avoid them, will make your time away even more beneficial in the long term.