I’ve always loved the symbolism and from the time I had my own home, had a grapevine planted somewhere in the garden. “Symbolism?”, you may ask, “What symbolism?”

In the Old Testament book of Numbers (13:23-25) the Israelites sent to spy out the promised land discovered a place of plenty. In particular, they found a grapevine that was producing so well that they clipped a bunch of grapes to take back to the rest of their countrymen as proof. That bunch of grapes was so big that it took two men to carry it on a stick. It was proof that God had provided a good place for them to enter, a place of provision… truly a promised land!

In France, we are in a rented house that didn’t come with it’s own grapevine so I planted some last summer but they are far from fruit-bearing at this point. So where’d the grapes come from? I’ll tell you, but let me go back a bit further to begin.

It occurred to me this week that in the excitement over NAYC, I didn’t tell you about the baby dedication that we had on July 23rd… just before leaving.

Remember Laurent & Virginia? When they arrived at church that Sunday, they weren’t alone. Little Florian was with them of course, but there was also a second carload of family members right behind – Laurent’s parents, his brother and sister-in-law.

They proudly showed them around the building and service began. The morning went off without a hitch and his family closely followed the preaching and, of course, the dedication ceremony.

Praise God for a couple committing to raise their child in the fear and admonition of the Lord!

One other NAYC tidbit before coming back to France… Imagine, in a football stadium, the chances of running into someone you met in the Philippines in 2001 and hadn’t seen since then. That’s just what happened.

Bro. Jeff Castillo’s parents pastor in the Illocos Norte province and I attended service there one Sunday. He’s since moved to Winnipeg, but aside from Facebook, we’d had no contact in years until God allowed our paths to cross at a concession stand of all places. Thank you Lord for unexpected blessings!

Last Saturday afternoon, Liz & the kids & I spent a few hours doing some clean-up at the church.

The kids took turns with the ride-on mower and when not doing that, they helped Liz with clean-up in the building as well as getting music ready for service the following morning.

King David said: “Better to be a doorkeeper in the house of the Lord than to dwell in the tents of the wicked.” (Ps. 84:10).

At the church I grew up in, there was paid janitorial staff so I often took for granted the state in which I found the Lord’s house. I’ve since come to recognize a special sense of ownership that comes with the church family taking care of God’s house.

Want to appreciate your church even more? Find a way to help take care of it! 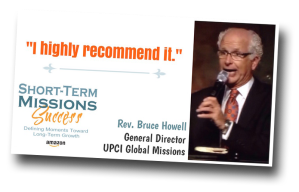 I continue to be encouraged by the way STM Success is being received and used.

Bro. Bruce Howell (UPCI General Director of Global Missions) introduced the book in his monthly communiqué to the Global Missions world, ending with: “I highly recommend it.”

Bro. James Poitras (UPCI Director of Education / AIM) informed me that they’d given copies to each of the participants at last weekend’s GoNext Seminar in Cabot, Arkansas – a weekend for young people with a specific interest in short-term missions. (The next one will be in Winston-Salem N.C., Sept. 15-16… see AIM2Go.org for details)

I pray that, whomever the recipient, it helps them discern and execute the call of God on their life toward missions involvement! God has so much in store.

OK Finally… let me come back to where I began.

The grapes are, in fact just the tip of the iceberg. Here’s part of what the Lord provided for us this week:

It may seem like a small thing, and there may be some elbow-grease required, but the Lord is providing for our needs… and then some!

Just like in the valley of Eshcol.
God truly is the same yesterday, today and forever! Thank you Lord!

…for keeping up with what God is doing in our lives and through us. We serve because you send… meaning that the victories here are your victories as well. Let’s praise God together shall we!

God bless you this week!