OK… maybe a whole castle is a bit out of your league… but how about becoming a part-owner? That you definitely can.

This is the Chateau de la Mothe-Chandeniers, located about 40 minutes for where we live and its for sale.

How does one buy a castle?

Normally, they don’t come cheap and more often than not, ownership falls into one of three categories:

La Mothe-Chandeniers is privately owned and has pretty much always been. Its construction dates back to the 13th century and ownership since then has passed from members of the nobility to notable politicians and wealthy businessmen.

In march, 1932, the owners had just installed central heating when, one evening, a fire broke out and consumed most of the interior right up to the wooden beams that supported the slate roof. Fire fighters from all over the region were unable to bring it under control and it has sat vacant ever since… completely unrestored. 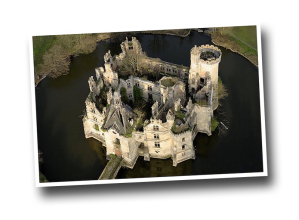 A group called the Friends of La Mothe-Chandenier is crowd-sourcing the necessary funds to purchase the property before it gets sold off for demolition. Shares in the project are 50€ each.

Just look…. doesn’t it have everything you imagine a French castle to have?

If the project goes through, something beautiful will come back to life, and you could be part of it for as little as 50€. (Here’s the crowd-sourcing link… just in case I’ve tempted you)  🙂

God makes us an even better offer! 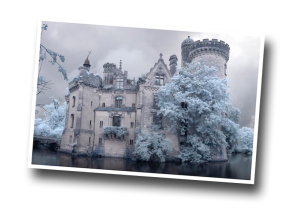 If you or I purchase a share in that castle restoration project, we become one voice in roughly 10,000 when it comes time to make decisions about details. We’ll have a voice… but it’ll be easily lost in the din.

God, However invites us to become part of a much better project. In return for our living for him – made possible by his grace – he offers us peace and forgiveness, a place in his family where we are heirs with him, joint heirs with Jesus Christ, and he’s preparing a place for us in a heavenly mansion. It may not have a moat or turrets… but it does have streets of gold and gates of pearl. More importantly however, we’ll spend eternity in the presence of Jesus… it’s a place where – moth and dust doesn’t corrupt (like how the trees have taken over the castle).

Here’s the kicker though. Unlike the organizers of the online auction for La Mothe-Chandeniers, who may or may not ever know you personally, when we speak, Jesus is just as close as the mention of his name. He knows the number of hairs on our head as well as the thoughts and desires of our hearts.

He knows us personally… because he’s a personal God.

Internet offers may cause us to have a “doubtful response” but if God makes an offer, you can take it to the bank!  He’ll come good.

Th-th-th-th… That’s all for today.

Just a short thought for the day.
Please continue to keep us in your prayers – pray also for the work in France.

God bless you this week & thanks for stopping by!