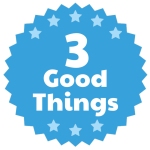 G’night Friday… It’s been a slice!

I’ll keep it relatively short tonight as tomorrow will begin early… very early. But I still have a few minutes to tell you about…