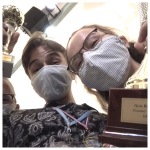 If you didn’t see my last post you may not have been aware that Dominic qualified, in the quarter final quizzing tournament (that took place via ZOOM), to go on to the national finals. So… last weekend, we changed things up and left Châtellerault for a couple of days. It was really, really nice. As we were driving up to Melun (greater Paris region) it occurred to me that it had been a full 6 months since I’d driven that route.

Pretty good you might say, but before I give you the full details, let me talk about the day before…

I was talking to my mom this week and she mentioned having run into someone that they hadn’t seen for years. What was a fairly common occurrence living in Atlantic Canada is, for all intents and purposes, not part of our daily experience here. For that reason, when those meet-ups do happen, they’re a real treat.

Yolène toured with Liz and I as part of the Continental Singers, back in 1995. She and her family had been vacationing in the Bordeaux area and they stopped in for the afternoon, on their way back up towards the Paris area.

Ahhh the simple joy of pulling out jokes that go waaaayyyy back and sharing memories all while making new ones.

After they left, we quickly got our things together, dropped the dog off to the sitter, loaded the car and headed toward Paris ourselves. It was the Friday night before the Saturday quizzing tournament.

Fun fact: Not all hotels are fully reopened yet, including the one we normally stay at (which has a family suite). The next best thing was conveniently located, but the rooms were so small that we had to take 3 rooms for the 5 of us – ugh! Family suites are NOT common here.

This is what quizzing looked like in the context of COVID. While organizers held the quarter finals by ZOOM, they wanted to have the final matches in person. Safety restrictions meant that ONLY the teams could be present, no spectators that didn’t have a specific role. Since we did, we were all able to watch Dominic quiz.

In a building that frequently has 250+ people, we were limited to 50, and everyone had to wear a mask at all times.

That didn’t stop Dominic though.

There are two quizzing divisions: experienced and beginners. Unlike in North America, the beginners’ division is not age based (quizzers don’t start nearly as young here as they do back home) but more dependent on how long you’ve been quizzing. Since this was Dominic’s first year quizzing here, and was not yet 18 for most of the quizzing season, he was a beginner.

He won the beginners’ division:
– as a team of 1 quizzer (Sophie coach for the tournaments)
– in his first year quizzing in French (Just like at home… speed, accuracy and the ability to interrupt/complete questions is key. He did this all in French!)

No only did he win the team trophy for the beginner division, he also got the trophy for best beginner quizzer. Needless to say, we’re very proud of him and the Lord blessed his year-long, sustained effort.

We stayed for service Sunday morning and made our way back to Châtellerault Sunday afternoon. It felt a bit odd to do so, because, beginning Monday, it was Bible School week.

Bible School students here attend classes 1 Saturday per month (7am – 6pm) and then a full week of classes each summer. (Incidentally, it’s coming over to teach for the summer sessions, beginning in 2009, that the Lord exposed us to the work here and eventually called us to come for longer – without letting us know how much ‘longer’, ‘longer’ meant.)

I taught classes by ZOOM as students gathered in two locations where they could come together and still be social distanced. It’s a different way of doing things, for sure, but the technology does allow us to continue the Bible School program without interruption.

In this picture, we’re evaluating students’ oral theses. Classes are taught during the day, then each evening, we spend 2-3 hours listening to & evaluating each student on their ability to answer questions on various topics that they’ve had the chance to prepare in advance. They are allowed very limited resources – only their Bibles and a few note cards – as they respond to 2 or 3 questions randomly picked out of a hat.

It makes for long days, but the advantage of doing it by ZOOM is that, outside of my teaching hours, I can still help out with life around the house and Liz is not left without a car for the week. (It also meant that, when I needed to clear my mind, I could just slip down to see the bees.)

Yesterday, when I went down to see them I saw something strange as I arrived. There were probably 30-50 bees forming a little ‘ball’ at the entrance of the hive on the landing board.

I knew enough about bee behaviour to suspect what was happening and sure enough, after several minutes, the reason was clear. A small hornet had tried to gain entry to the hive to steal some honey.

Bees react to hornet / wasp intruders by ‘balling’ them. They completely cover them, a couple bee-layers deep and vibrate their bodies. This creates heat and they essentially ‘cook’ the intruder to death. Honeybees are able to sustain body temperatures a couple of degrees higher than wasps, making this method possible.

There’s a lesson to be learned there, both as Christians (promoting unity and godly living) and as a society in general (masks – COVID). They all adopt the same behaviour, working together to defeat their common enemy; what’s a threat to one, is a threat to all, so they defeat it together.

Let’s do more of that.

God bless you this week.
Thank you for stopping by for a “coffee chat”