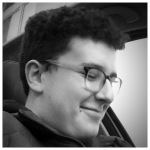 …our youngest and the most reluctant to speak French, when we arrived in France. Remember him?

Well… suffice it to say that he’s well & truly out of his shell and today, we’re talking Timo!

This morning, Timo & I headed out of the house early… VERY early for a Saturday morning after the work week.

Normally, Saturday mornings at home are a fairly relaxed time where we eaaaaaasssssse into the day with 1-2 cups of coffee, and something to eat that ressembles brunch as much as it does either breakfast or lunch.

Today however… he was standing at the door of an optician’s boutique just after 9:00am, dressed to impress.

He’d been having a hard time tracking down the owner who, when Timo visited in October, said… come see me in November. He’s stopped by several times over the past two weeks, but each time, the owner was either too busy, on the phone or in a rendez-vous.

You see, Timo had to find an internship for the month of January as part of his studies. He’d somewhat pinned his hopes on this particular optician, but time was a’wastin’ as they say, and he didn’t have a firm answer one way or another.

So, he figured that by arriving first thing Saturday morning, she would likely not yet have had time to get all that busy, so it represented an opportunity to try to speak with her.

His early morning rise-n-shine paid off and, after having put it to prayer, he went to speak with her. Lo and behold, he now has his internship nailed down.
Thank you Lord!

So after church, we gave ourselves a bit of time to wind down and make the final preparations (Liz did wonders in the kitchen, preparing a mountain of food… as per her norm) before the kids arrived.

Meanwhile Dominic & I made the rounds to get gas and one final present that Dominic wanted to pick up.

I say make the rounds, because we literally had to do that. Due to labour strikes at several fuel distribution centers in France, several of our local gas stations were out of diesel. 😳🙄

We finally got some, Dominic picked up his gift and we headed back with enough time for a short breather before their arrival.

We all had a good afternoon celebrating our guy!
He’s a good guy!

Last night was another ZOOM Prayer night as we continue to have 3 French cities represented as well as one of our guys who’s studying in Germany. It’s good get together.

Timo shared his prayer request for this internship appointment today and he had shared it with the youth group in Bordeaux as well.

This morning, not quite 12h later, he was able to share a good report.

I love it when God shows himself to our kids… because of their faith and their prayer.

Thanks for stopping by this week.
Continue to pray for our newest young adult.
& God bless you as you do!