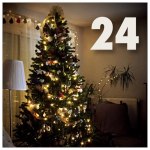 Welcome to day twenty-four of my advent calendar of ornaments. Welcome to the last look at an ornament from our hodge-podge of a Christmas tree, for this year.

Does anyone remember the long stringy tinsel from the 1970s & 80s? That stuff was a TRIP!

Granted, it gave a distinctive look to the tree which, at that time, was heartily appreciated and really quite nice. However, if you walked by with even the smallest amount of static electricity on your clothes… you were wearing it! “Clingy” is DEF-initely the right word to describe it.

THEN… when it was time to take the tree down… forget it!

I had some frugal family members who were bent on salvaging & saving the stuff for use another year, à la “That’s perfectly good tinsel, why throw it out when you can reuse it next year?” … OK Gramma… have-at-it! We’ll take the tree out when you’re done removing tinsel.

Note: Gramma was also notorious for exhorting us to open the gifts carefully… “Don’t rip the paper!” … for paper too could be reused (!). In fairness… she wasn’t wrong… it could be reused but my gracious… the bother!

That’s why today’s ornament was such a lovely find (sometime back in the 1990’s). It was real tin, twisted tinsel and it came from a gift / decoration store down on Prince William Street, in Saint John. I don’t remember the name, but it was near the old Bank of Canada building (if any Saint Johnners remember, let me know in the comments).

It was likely more expensive than was sensible however… it truly was re-usable (My grandma would be proud). It did not cling to you every time you walked past and it was fairly easy to pick out after all the other ornaments were off the tree. Plus… because they were twisted, they gave all kinds of little glints of light from no matter which angle you were seeing them.

We used to have 3 tins, but when we came to France, we only brought 1 (we didn’t expect to be here this long). I suspect we still have extras in storage, but as to when we’ll get home & bring them over… your guess is as good as mine.

Want to get some?

I just Googled this item to see if they were still available anywhere and indeed they are… from Pietersma Tinworks in Ontario, Canada. Amazing that these beautiful icicles are still available. Click here to get yours.

Well… It’s Christmas Eve and that’s when all good advent calendars come to a close. So rather than saying “See you tomorrow!”, I’ll say “Merry Christmas” in stead. Thank you for visiting a bit more frequently over the past few weeks, I hope that these little musings have added a little something special to the lead-up to your Christmas.

There’s no Christmas without Christ… The tiny babe in the manger came with one purpose… the cross of Calvary, so that you and I could experience forgiveness of sin, peace with God and eternal life. Life with God is a marathon, not a sprint. Sometimes we feel like we’re feasting at the “table he prepared for us in the presence of our enemies…” (Psalm 23.5) and at other times it feels like we’re “walking through the valley of the shadow of death” (verse 4), but whether in good times of not so good… we’re not walking alone, he is with us!

It all started at Christmas!