Sunday night, I had the incredible pleasure and great privilege of baptizing Timo in Jesus’ name for the remission of sins…. what a thrill!

In Timo’s own words Sunday night…. “These will be four great days!” He was referring to the fact that:

It’s possible that Timo received the Holy Ghost earlier (he’s very sensitive when praying in the altar), but we never pushed the issue too much with him: we wanted it to come from him… we wanted him to be convinced enough about it to tell us… We thank God for his incredible gift!

There were a couple of things that were very neat to see / hear: 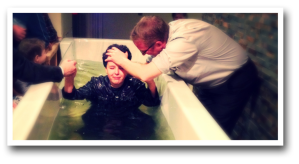 How neat to hear statements like that which make me so grateful for Liz’s influence and the influence of Sunday School Teachers who put that kind of understanding in the heart of an almost-9-year-old!

As of Sunday night, November 9th, all three of our kids have been baptized in Jesus’ name for the remission of their sins and filled with the Holy Ghost, speaking in tongues as God gives the utterance. (the promise of Acts 2.38, exampled in Acts 2.4)

All three have been baptized since I became a licensed minister and so I have had the incredible honour of baptizing them all myself. I’m somewhat in awe when I stop to think about that.

When Timo told us Saturday that he’d gotten the Holy Ghost, I didn’t put it together immediately, but Sunday night before service, I remembered that there was a connection between that day and the #IAmGlobal offering taken at General Conference.

Liz & I pledged an amount in the #IAmGlobal offering… an amount that was a stretch for us. We determined that, rather than rent our house while we went on AIM, we would sell it. This would not only allow us to leave completely debt free, but would allow us to make a sacrificial offering as well. It wasn’t an easy decision: not only would it require more preparation prior to our departure, but it also removed one of the safety nets for our eventual return home post-AIM.

So what’s the connection with Timo’s Great 4 Days?
I think the best way to make that clear is to quote you from my journal entry of October 2nd, where I describe our experience of the Global Missions service and the #IAmGlobal offering:

“During his sermon, Bro. Mangun said that the supernatural would follow the sacrificial, so he urged people to not leave… to wait for the giving to be completed, then we would pray and there would be healings & such.

After we came back to our seats, someone that I did not know came up to me and prayed:
“It’s not that it ‘will happen’, that it is ‘going to happen’… it ‘has happened’. God has seen your desire, your tears and it has happened; He has brought it to pass, He has heard your prayer.”

What else can I say? We trusted him with something that, eternally speaking, is of little consequence (our house & our finances) and within barely a month, he established the eternal in Timo’s life!  Stepping out in faith is never easy (or it wouldn’t be a step of FAITH) but there’s nothing like the way that God answers!

God is great!
God is real!
I can trust Him!
Praise the Lord!