Hold onto your hat… er, your crown, for the first paragraph or two… it’ll make sense… REALLY!

In contrast to the USA (where regional divisions are called ‘states’) and Canada (where they are referred to as ‘provinces’), the regions of mainland France are called départments, and there are 96 of them.

We need to let that sink in for a moment, because for North Americans a department is found in a retail store (the ‘toy department’ or the ‘kitchen department’) or it denotes part of an institution (the ‘loans department’ of a bank or the ‘human resources department’ in a corporation). In France though… it’s geographic!

Unlike in North America, not only do the départements have names… they also have numbers; for example:  Seine et Marne (77), Vienne (86) and Paris (75 – yes… Paris is both a city and a département, just like Quebec, QC).  These numbers constitute part of postal codes, social security numbers and vehicle license plate numbers as well.

It is necessary to understand this as you’ve already seen me refer to one region called the Île de France  (which, when translated means the “island of France”). We are, of course, not talking about an island. The term ïle de France refers to 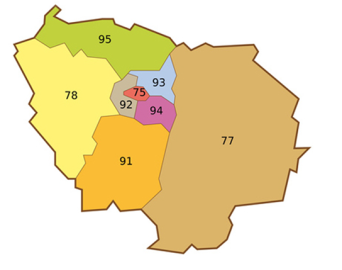 a collection of départments which surround the capital… Paris. You can see île de France at the right. Paris is the red area in the middle, denoted by the départment number 75. So then île de France, is made up of 8 départements all together.

Another name for this area (Île de France) is La Grande Couronne (the big crown)… so named because it visibly forms a large, thick, ring around Paris.

What really interests me for the purpose of this post though, are the three other départements which form a smaller, innermost ring around Paris: départements 92-94.  If the larger ring is called the large crown, then it makes sense for this smaller area to be referred to as the petite couronne (the small crown).

Why does the notion of la grande et la petite couronne interest me? Because of something that God told me in 2012 while visiting Bro. Brochu’s church in Western France.  He impressed upon my heart that, in the same way as Paris had its petite couronne, so too would the Église de Châtellerault… it would have a ring of churches around it… whether full blown churches, preaching points… all of which were, of course, subject to His timeline.

I’m not sure whether that is something that we’ll see the results of of not during our 1.5-2 years.  Perhaps it will begin while we are there onsite, or perhaps it’ll be further in the future.  Nonetheless, I’m glad that as a family we will quite simply, not just “go with the flow” but we have something to dream of… to plan for… to work toward during our time there.

Please join us as we pray for a ring or a crown of churches surrounding the church in Châtellerault, in western France.