If you consider our upcoming time in France as an engagement, then it wouldn’t be too much of a stretch to say that we first started dating in 2005.

In 2003 I began my Master’s Degree in French Linguistics at the Université de Moncton, in Moncton, New Brunswick. In the context of these studies I found my self at a linguistics colloquium in the city of Tours, France, located about 1 hour from Châtellerault. At that time, missionary Steve Schobert was living in Tours, but looking after the work in Châtellerault. We connected and I was able to join him for a service on Sunday. At that time, they were meeting in the large, downtown home of Sis. Cécile LeDay, a former Catholic nun whom God had filled with the Holy Ghost and revealed himself in his fullness. 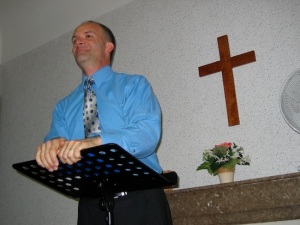 In early summer, 2006, we were in Belgium to spend some time with Liz’s family. We wanted, though, to take a few days of family vacation, just the 5 of us so we packed up a rental car and headed to western France. Surviving the traffic on the highway that surrounds Paris was our first major accomplishment!  We soon made our way to Châtellerault where we spent a couple of nights in a 15th century castle… the Château-de-la-Motte, located just outside the city. The Brochu’s, back from deputation, met us at the Château and we followed them to church. The church was still meeting in the home of Cécile LeDay (where this picture of Bro. Brochu was taken), but they were in the process of purchasing a larger building, just on the outskirts of town (You can read more about that visit here). 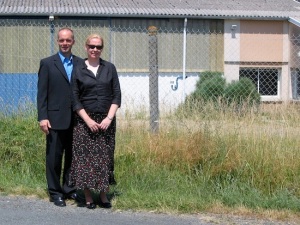 Once a small manufacturing facility, this building was strategically located on a very busy national road and benefitted from an acre of land, an office area a small production area and large equipment hangar. Having been damaged by fire, it would take time and work to bring back to a useable condition, it was key because the hangar area allowed a large space for future growth.

Although there would be other trips to Europe between 2006 and 2008, none brought us into contact with our churches in France. A new door would begin to open up in the summer of 2008 however, for it was then that we met Bro. & Sis. John Nowacki for the first time. They were on deputation and came through our city. We were able to share a couple of meals together (the one pictured is with retired missionaries to Pakistan, Bro. Ron & Joy Hanscom). Bro. Nowacki asked me, for the first time, about the possibility of coming to France to teach in their Bible School the following summer. 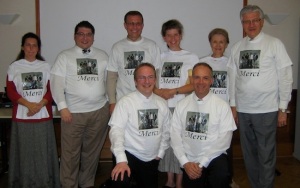 I was in France for the purpose of teaching at the Bible School, and that for 3 weeks during the month of July, but, having become familiar with the church at Châtellerault through the years, I desired to go with Bro. Brochu and spend a Sunday there. Since he was traveling back anyway, to look after the services, I went with him and got to attend church in the new building. What a thrill to have seen the growth and the jump to the new building. At that time they had managed to make repairs to the office area, which is where the 15 or so people were meeting (July is a heavy travel time in France, so numbers were low that Sunday, but the presence of God was wonderful). Work had already begun on the small production area which would be the more permanent sanctuary and they had a Sunday School room as well.

Incidentally, another Atlantic District pastor was there that summer, ministering in the week-long seminar: Rev. David Ferrell of Calvary Tabernacle in Perth-Andover, NB. 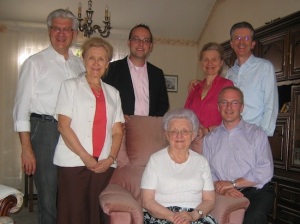 During this second time back to the French Bible School, I was only there for two weeks and did not make it down to Châtellerault. During this trip, I was able to share the time with another Atlantic District minister, Rev. Daniel Desroches who soon fell in love with the people and the work there… and the feeling was mutual as they fell in love with him as well. Here, Bro. Desroches is pictured with the Nowackis, Bro. Nowacki’s mother, sister and brother-in-law.

This would be my last time in France until the summer of 2012 when God did major surgery on my heart and set a new direction in my sights.

As you can see… our connection to the church in France is not an overnight thing, but God slowly and steadily planted seeds in my heart and, with time and patience, watered them until they began to bear fruit.  In fact… one could argue that it goes back even further than all this… Liz & I spent 2 days, during our honeymoon, in the city of Tours… where we later met Steve Schobert in 2005… but that is for another post.