See this picture? It shows a new preaching point in Western France, and you were praying for us while we were there last Saturday!

Located in Les Sables d’Olonne (on the Atlantic Coast, above La Rochelle), the Gomez family is a group of evangelists all under one roof!  Bro. Gomez travels to Paris for service every Sunday (a work they began in the past couple of years) and they have another group that meets in their apartment every Saturday. Last week we were 21 in total – 0f 6 different nationalities.

Their challenge?  They are Columbian and have a difficult time preaching / teaching in French… hence our involvement last week. Thank the Lord for an open door! We’ll see where that will lead in terms of possible further involvement on our part. Pray for national leadership as they map a plan for this group.

Back to the Atlantic

The map shows you where les Sables d’Olonne is located compared to Châtellerault (roughly a 2.5 hour drive by car).

Following service and a time of fellowship, and before heading home, we went down to the beach where the kids dipped their feet in the Atlantic Ocean for the first time since Summer 2014!  They were excited!

Despite cool temperatures, Timo even went for a quick swim. It didn’t last long though… he emerged from the water totally red-skinned due to the cold water. 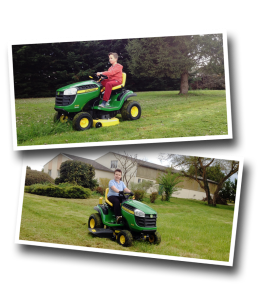 Since we’ve had our fair share of rain over the past two weeks, the boys found opportunity to try out the new ride-on lawn mower on one of the dry days (Somehow I don’t think it’ll be difficult finding help to mow from now on…).

It was actually a great way to spend the remainder of Sunday afternoon with the boys. Although they were on the mower alone for the photo, we doubled-up for most of the time so that I could teach them how to mow and what to look out for in terms of uneven ground, thick clumps, twigs, etc.

They also hauled a few branch trimmings that I’d brought down the previous week so that we could have a bonfire later in the week.

This was a long time coming, but my mom arrived in Paris Wednesday morning, (her last visit was a quick 2 day trip back in 1991 when I was a volunteer missionary in Belgium). What a thrill to have her here for the next two weeks!

One of the things that was always part of my childhood was backyard bonfires so it was only natural that, on her second day here, we organized a bonfire and shared both a meal and the evening with our Australian friends. They moved here only a few months before we did and were also a homeschooling family so we had quite a lot in common.

We are thankful that God allowed our paths to cross.

Beginning last night, youth from around the country came together for a weekend of fellowship, worship and play. Sophie and Dominic are representing Châtellerault. This is their second youth retreat so they are already a bit more familiar with faces and names and more comfortable with the language so we anticipate that it’ll be a positive time for them, both socially and spiritually.

Liz & I drove them out (about an hour away) leaving Timo & Gramma to have a special evening together… including home-delivered Dominoes pizza, a couple of movies and some Christian comedy courtesy of YouTube. It also meant that Liz & I could have a bit of a date on the way home as well. We stopped in La Roche Posay for dinner and discovered that dark cherry sauce on duck makes for a yummy combination!

…you never know what things we may be dealing with or coming up against here “on the ground”. Your prayers are vital and we thank you for them!  God bless you today!

… here is a short video of Liz & the kids getting ready to lead worship in Les Sables d’Olonne last week. This is what you are supporting.