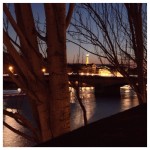 “The sun had set, the last few sips of coffee had long since grown cold and there was nothing left to do but stroll… almost, but not quite …aimlessly. For that is what one must do in Paris if one is to truly appreciate this intoxicating place.

The breeze carried me down the ‘quais’, past students exchanging base ideas and grand ideals, past a ‘sans abri’ in his rudimentary encampment, almost oblivious that the ducks gathered ’round him… expecting the handout that he himself never received.

Then for some reason unknown, I looked back, over my shoulder, and I saw her.  Through the trees, beyond bridges and buildings, a hundred thousand shadows away, she stood, tall and magnificent, emanating light. Dazzling from near or far, the Eiffel Tower confirms that you’re not dreaming. You’re well indeed… in Paris.”

Last weekend was a Bible School weekend in Melun. A brother from church travelled with me and I dropped him in Paris from where he travelled to meet family. I knew traffic out of Paris would be horrendous on a Friday night (a 40 min drive can easily double or triple) so I opted instead to grab a coffee and head down to the banks of the Seine, opposite the Musée d’Orsay.

My initial plan was to do some journalling, but I ended up listening to a message by Pastor David Myers (Palm Bay, FL) entitled The Blessing of Want… incredible message and very encouraging.

By the time I was ready to leave, traffic had died down considerably and getting out of town was a breeze!

Returning from Melun on Saturday, I stopped in Tours to see Danielle, the lady we baptized in February. Her cancer treatments had taken a toll on her of late so she was glad for a time of prayer and Bible study.

Interestingly, the Lord had put John 7 on my heart to share with her… affirming that “…if anyone thirsts, that they can come to the Lord and drink.” Little did I know that during the week, she’d talked to the Lord several times about being filled with His Spirit… wondering if it was for her as well.  That passage (vv. 37-39) goes on to say that “…out of his belly would flow rivers of living water” and this was said “concerning the Spirit.”  Praise God for a word fitly spoken! He knows just what we need.

Afterwards, I picked her up a few groceries and took some photos before hitting the road for the final 45min.

Fortunately there are a number of things related to the Brochus’ transition that will require them to be in Châtellerault from time to time, not the least of which is a connection to the church. They expect to be in service at least once monthly.

The people are somewhat nervous about the change so please keep this as a matter of prayer. This is the only consistent, long-term pastor that they’ve known for their entire Christian walk… transition isn’t easy.

On Tuesday morning prior to their departure, Bro. Brochu & I met with a couple from the community that Liz & I had met and who are going through family difficulties. We had prayer together and they were moved to tears.

Two big things “on the books” this week are the following:

By the time you read this, we’ll already have driven the roughly 2 hours to the Atlantic coastal city of Sables d’Olonne, where a group of 14-ish people that have been having house meetings. We are going to worship with them and teach. More on that next week.

Though Liz & Soph got to spend time with Gramma during their trip to Canada last month, the boys & I haven’t seen her since January 2015 when we said good-bye.  Can’t even begin to say how excited we are to have her visit.

Thanks & Have an INCREDIBLE Day!

In case you missed it, on Wednesday I shared what I would say if you & I were having coffee. Different from my regular posts, I was challenged to “dig a little deeper” into things that are renting space in my head these days. If you still have 5 minutes… give it a read here.

God bless you today!
Thank you for your prayers and support!