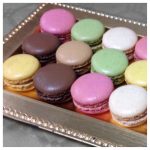 What makes up part of New Year’s Eve celebrations in France you ask? Why, macaroons of course!

Given the way the holiday fell this year (on a Sunday) we opted for a Saturday evening service as opposed to a New Year’s Day service on Sunday morning because sometimes it’s nice to just change up the rhythm a bit. Numbers were down as some were away with family and others were unwell but nonetheless, it allowed us to enjoy time in the Lord’s presence and spend some time together afterward, popping the cork on some apple cider and making short work of delectable treats… some store-bought and some homemade (we have a baker in the church).

After church, we headed home for an evening of “Turkey Foot” (a game played with Dominoes) and what else…. more food.

The next morning we said goodbye to Liz’s brother and his family as they headed back to Belgium. It was good to have them with us over the holidays.

We are now in week three of this little adventure and his spirits remain high.

Monday we had a visit with the orthopedic surgeon who deemed it necessary for him to wear a full cast for another two weeks (previously he’d had a splint only). This isn’t what Timo was hoping for, but there was still some swelling & bruising and without any support, certain movements caused him some discomfort.

On the upside, he could choose from one of three colours for his cast… Red, White or Blue (how very French). As you can see, he opted for red, not realizing until afterward, that it now matched his crutches.

Since school began on Tuesday, he’s been getting used to navigating the 4-story building (with no elevator). If anyone expresses pity, he simply asks if they want to carry his backpack!  🙂

Since ’tis the season, I thought I’d show you two photos of real mistletoe, taken this week only a few minutes’ walk from our house.

The top picture makes it look very picturesque and we can see where the idea of a ball of mistletoe comes from: this plant grows in a spherical shape, right on the branch of the tree. Typically, when decorating with it, people only use sprigs as the balls are too big to be practical.

The second photo shows a different picture (pardon the pun).

Mistletoe is actually a parasitic plant which spreads as birds eat the berries, leave their droppings on the branches of other trees and essentially plant a new mistletoe ball. You can see just how invasive it is… making some of the trees barely visible at all.

Someday I may use it as a sermon illustration. There can be things get into our lives or our spirits that we think “Oh, that’s no big deal… under control.” but left unchecked, (whether attitudes, behaviours, etc.) they can eventually leave us unrecognizable to friends and family… they can dominate our character and dwarf the real us.

Just something light to think about, the next time you kiss someone ‘neath the mistletoe!  🙂  (Sorry, did I just kill the romance of Mistletoe for you!) 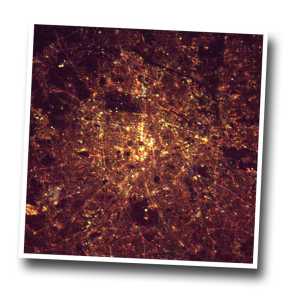 On New Year’s eve, French astronaut Thomas Pesquet (currently on the International Space Station) tweeted out this picture of Paris seen at night.

If you know what to look for you can get a sense of what is what:

So if you’re ever in Paris and don’t have a map… just come back to this post and Boom! … you have a map. Crystal clear right!? 🙂

The New Year is always a time to regroup & refocus. Pray for direction and unity in our team as we begin, this week, 21 days of prayer and fasting, which will undoubtedly set the tone for the new year.