I recently had someone ask me about the meaning of Pentecost.  Interestingly enough, here in France, Pentecost is a long weekend and Monday is a holiday… but what’s the holiday behind the holiday. Similarly… just as turkey is associated with Thanksgiving, ham to Easter and perhaps goose (or again Turkey) to Christmas, so in France, meat producers have been trying to associate veal with Pentecost… Giving the Thanksgiving turkey, the Easter ham, the Christmas goose, and… the Pentecost Veal. Commercialism isn’t dead… it’s very much alive. But that’s not Pentecost.

Originally, Pentecost was the Jewish feast of Weeks – associated with the giving of the law of Moses on Mount Sinai.  Pentecost is most widely known, however, for the day on which God poured out his Spirit.

The first to experience it were the 120 believers gathered in the upper room, following Jesus’ instructions to “wait for the promise of the Father” (Acts 1.4).” The arrival of that promise was accompanied by the sound of a mighty rushing wind, by what looked like tiny tongues of fire above each one and the phenomenon of people speaking in other tongues as the Spirit of God empowered them to do so (Acts 2.1-4).

This was so new that people on the outside didn’t know what to think. They were surprised to hear men who’d never left Galilee, speaking many different languages (Acts 2.5-6). Some of those on the outside looking in just assumed that the men had had too much to drink (Acts 2.15), when it was actually the fulfillment of Old Testament prophecy (Joel 2.28ff).

The goal of such an occurrence? In Jesus’ words….

“ye shall receive power, after that the Holy Ghost is come upon you:
and ye shall be witnesses unto me both in Jerusalem, and in all Judaea,
and in Samaria, and unto the uttermost part of the earth.”
Acts 1.8

One of my favorite parts of the story of Pentecost comes in Acts 2.39 where Peter says that this same promise is “for you, for your children, for all that are afar off, even as many as the Lord our God shall call.”

Boom!  There it is. It’s like I can see my name in the Bible there.

I experienced my personal Pentecost in July 1994 when, while camping with friends in the state of Maine, I awoke at roughly 5:30 am one morning, praying in tongues. In my head at first but when I got up to go read my Bible and pray… full sentences were right there. No one was praying with me. There was no praise team singing or preacher preaching… it was just the Lord and I.

Jesus, on the sermon on the mount, said “Blessed are they that hunger and thirst after righteousness, for the shall be filled.” (Matthew 5.6).

Pentecost, as an experience, is not just reserved for people who attend a Pentecostal church… and I’m glad for it. I was not attending a Pentecostal church at the time, but God saw someone who hungered for more of Him… and he responded to my hunger.

God still responds to hunger…
If you hunger and thirst after righteousness… you can be filled!

Did you happen to read my “7 Mistakes” post back in January? If so, this video will give you the highlights. If you didn’t, you can read that full post here. 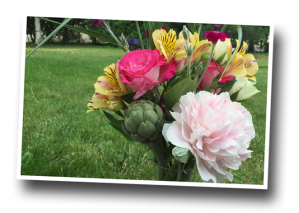 Last Sunday we gave a trio of roses to the moms present in church (It was Monther’s Day here in France, a couple of weeks later than in North America).

We had two mini-bouquets left over and gave one to each of our two neighbors.

One of them reciprocated with a bouquet from their garden…. roses, peonies, altstroemeria and even an artichoke (private joke… since Liz is Sicilian and there’s an old Sicilian wives’ tale involving the prince of artichokes).

God has blessed us with great neighbors.

Gonna finish off today with putting a bug in your ear. I’m running a couple of promos on Paris 3 Days No Stress coming up in July.

The first two days of each week… I’ll be offering up to 50% off. The main driver is to give a break to Canadian customers for whom the paperback is not available on Amazon.ca, meaning they incur extra shipping on Amazon.com orders. But beyond that… everybody wins. 🙂

There’ll also be a bit of fun with a giveaway of something French & Cheesy.
Check out the full details here, on Facebook.

Gonna call it quits for today. We’re in Melun for the Pentecost Weekend Convention… more on that next week!

God bless you today and thank you for stopping by today!
Pray for a great move of God this weekend!