Inukshuks are stone piles, usually in the shape of a man, that mark a location and originated with Arctic cultures. Back home (though far from the Arctic), it’s not uncommon to see small make-shift inukshuks on the side of the highway, made by random passers-by who wish to leave a trace of their passage. The rock piles in this picture are on the eastern-most tip of l’île de Ré (Ré Island). They’re not in the shape of a man… but they were no doubt built with the same goal in mind:  Beach goers stacked them as a way to mark their passage.

I’ll finish up today’s post by coming back to piled stones, but first let me tell you about our week.

Last of the Summer Birthdays

Sunday was my birthday and we celebrated with a fairly new young couple from church who came for lunch after service. In a couple of weeks we’ll be having a dedication service for their little guy so it was really nice to connect for the afternoon. Great young couple in whom we’re seeing the Lord bring about growth. 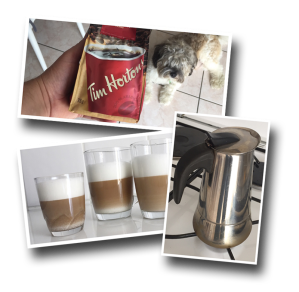 On Monday we finally cracked open a package of Tim Horton’s coffee that was sent to us at Christmas by Capital Community Church in Fredericton. We’d been saving it up for a “rainy-day” so to speak.

It doesn’t look like your average medium double-double but it had that oh-so-familiar taste.

Some of you may have see the photo of Liz that I tweeted back on Tuesday. It has been so hot again this week that late-nights or early mornings are the only comfortable time to work.

Liz & I camped out on the patio to work… she on the translation of Steve Willoughby’s book that she’s editing (“Entering the Restricted Zone” – Traducteurs du Roi, QC) and me on my Short-Term Missions book (launching later this month).

Call it a “working date” if you will. I’d picked up some rose-flavoured nougat, Turkish-delight and syrup (added to Perrier) when Timo & I were in Provins last week. Provins is known for it’s rose-based products. So we cracked them open over candle-light and computers!

Caution: too much rose syrup in the Perrier can quickly go wrong…. “Hmm… Tastes like grandma’s soap.” said Liz at one point. 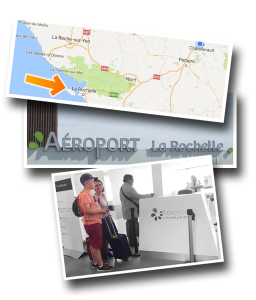 Remember that Soph & Dominic & I will be headed to NAYC in a couple of weeks? Well, since Timo was too young to be part of that, Liz is doing something special with him this week and next.

Yesterday we drove about 2 hours to the coastal city of La Rochelle. Lowcost carrier Ryanair runs flights out of there, directly to the city where Liz’s parents live. So they are spending the week there.

This was Timo’s first flight since coming here in 2015… needless to say, he was PUMPED!

The airport there is even smaller than our airport back home … so it was comical to see them make up passenger sorting procedures “on the fly”.  🙂 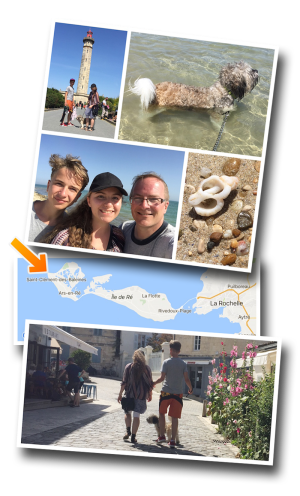 After Liz & Timo went through customs, since the airport was also virtually at the entrance to the bridge leading to Île de Ré, we opted to spend the day out there.

We drove to the Phare des Baleines (Whale Lighthouse) at the tip of the island. We didn’t see any whales… but we did see a small Tibetan Terrier in the waves. First time in the water since we had him and he was glad for relief from the 36 (96*F) degree heat.

We may or may not have done some hunting for sea glass. Old habbits die hard… we spent hours doing this back home.

One of the signature “symbols” on the island is the Hollyhock (pink flower in the bottom picture, with Sophie & Dominic). They are everywhere and grow like weeds…. beautiful weeds. For years, while I worked for Xerox, I had a postcard on my desk from this island… because of the hollyhocks. Sixteen years later, I finally got to visit.

The last thing we saw before leaving the island was the ruins of l’Abbaye Notre-Dame de Ré, also known as l’Abbaye des Châteliers. These ruins date back to the 14th century.

It struck me that the grounds immediately surrounding the ruins are well-kept and green. Beyond that, only meters away is a field of grain, ripe and ready for harvest.

Yet that place where the presence of God is supposed to be found, lies in ruin.

“You also, like living stones, are being built into a spiritual house to be a holy priesthood, offering spiritual sacrifices acceptable to God through Jesus Christ.“

I am reminded that we, as Christians, are meant to be a place where people can look to see the Spirit of God alive and at work. We are meant to be the ones that look out onto fields which are ripe or white unto harvest, and to be ready and available to go.

Yet, if we’re not careful, things can get lodged in our heart and our spirit that make us less like “living stones” and more closely resemble a church in ruins, unable to perform her function: Taking part in the harvest and “offering spiritual sacrifices acceptable to God.” This sad decline can take place within meters of a ripe harvest and surrounded by a “well maintained exterior”.

It happens so easily. Lord don’t let it be me.

God bless you today and help you to be a living stone!

Thanks for being part of my day!