Crêpes are not part of my native culture. The thin and very adaptable base so common in French culture was virtually unknown to me until I was in my teens. In its stead, growing up in eastern Canada, we had “pancakes” (or “flapjacks”) a much thicker & more filling version of the crêpe (or is the crêpe a thinner & more refined version of the pancake?)… Either way, where they were not part of my native culture, they’re a major part of my adopted culture! 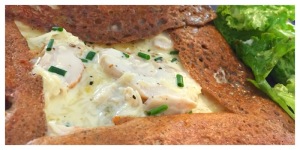 Right from the outset there is a distinction to be made between crêpes and gallettes, the two being virtually the same with the exception that the latter are made with buckwheat flower as opposed to white flour. For the purposes of this article, though, I’ll use the more generic word crêpe across the board.

Brittany to the World…

The little restaurant in western France where I’ve been “doing research” for the past month or so is called Le Crêpier Breton; “breton” means, hailing from Bretagne or the Brittany region of northwestern France.

Brittany is a proud region whose residents are fiercely loyal. When asked, most of them would say that they are first and foremost Bretons and only after that, French.

The region is known for a number of things, one of which is butter, a staple in all forms of cooking there. It is also known for it’s dependency on the water (of which it is largely surrounded) and hence, on the fishery. For this reason, my latest “research” had me focus my attention on the Guerlande Galette, which boasted a traditional galette stuffed with scallops, chorizo sausage, sautéed apple and a creamy emmenthal sauce.

Galette with chorizo sausage, cheese and an egg over easy

… no worries, they’ve got you covered. Here you can see a galette with chorizo sausage, cheese and an egg, cooked over easy just before being served. If you’re a soft-yoke person then you don’t need me to describe the satisfaction of gently breaking the yoke to watch it spread, filling the entire center of the crêpe. In fact, you can get just about anything on your crêpe.

Crêperies tend to make for a fairly relaxed place to eat and at a reasonable price. It’s not high-French cuisine so to speak so they tend to be a bit flexible as well. For example, in my Guerlande Galette above, I didn’t tell you (yet) that it normally comes with andouilles (pork entrails) as well, but I don’t do entrails… not at all!  No worries though… they axed the innerds for me. 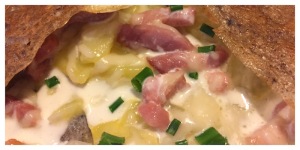 A savory crêpe can run anywhere between 6€90 and 12€ in your average crêperie. Seafood will be on the upper end of the scale, chicken & sausage in the middle and more basic ingredients like egg, cheese & lardons (bits of cooked ham) will be in the lower price range.

Depending on what you choose, of course, your dinner will be more or less filling. While the crêpes themselves are quite light, once you start adding cheese, sausage, potatoes, etc. you can soon find yourself coming away more than satisfied. Granted that sense of satisfaction will also be determined by whether or not you go for dessert.

Probably the most well-known crêpe dessert of all (at least in North America) is Crêpes Suzette – where the predominant flavor is citrus. But dessert crêpes come with just as many different options as their savory counterparts.

On our latest visit, my wife had a honey & lemon crêpe, where the honey is drizzled in circles and a few teaspoons of freshly squeezed lemon juice is presented for the customer to add. (note that this time, the crêpe has been folded in quarters. This is a common way to serve a dessert crêpe)

On this particular day, I had an apple and caramel dessert crêpe where, similar to the honey lemon version, the galette was folded to a quarter wedge, filled with warm sautéed apple slices and drizzled with warm caramel.

*we may or may not have cut our respective crêpes in half to try both.*

So you can go from rather light & simple dessert crêpes to the truly extravagant Banana Split Dessert Crêpe that my son had one time.

Under that chocolate drizzled mountain of whipped cream is a banana (split in two halves) and three balls of ice cream.

Price-wise, dessert crêpes can run you anywhere from 3€90 for a simply sugar / butter crêpe, to something like the Banana Split version which, if memory serves me correctly was in the 7-8€ range. Not to mention all of the possibilities in between… fruit, chocolate & banana, Nutella, flaming liqueurs, etc.

There is a crêperie that we always enjoy in Angles-sur-l’Anglin, but since it’s about a 30min drive away, we most often have crêpes at Le Crêpier Breton in Châtellerault, where we live and which TripAdvisor reviewers place at #2 of 56 restaurants here in town. Well worth the stop!

Want to try it at home?  Click below for 3 great recipes: