My first visit was in 1995 and I’ve probably been there a dozen times since then… but never inside. I’m not sure why exactly. Perhaps is was a lack of enough time to do it justice, perhaps the combined entry price of a family of five scared me off (although they’re not as much castle-goers as I am… “You seen one, you seen ’em all”, while not entirely an accurate summation of their feeling, is not totally inaccurate either), or perhaps it was those who told me that it was rather empty, or unfurnished, compared to other castles. Whatever the reason, I’d never been in… until recently.

I was traveling home from the Paris region earlier than I’d expected to and since Chambord is only 10 minutes from the highway, I decided to get off the highway and travel the departmental roads through the villages of Mer and Muides-sur-Loire.

Driving through stretches of local roads lined with Plane Trees (or Sycamores) will definitely reinforce any romantic stereotypes you may have about driving in the old world. While I can’t guarantee you’ll see a zippy little red convertible on your trip… I did see one on mine.

A 3-4 minute drive through the Chambord National Hunting Reserve, and across a bridge spanning the Cosson, brought me to the castle.

It is a near perfect mix of broad-based heavy footing, anchoring the massive structure to the earth, and light, soaring chimneys and turrets, carrying your gaze heavenward.

The front view of the chateau that I’ve shown you above, is actually a bit deceiving in terms of portraying the size of the building.

The main structure is comprised of a square keep in the center with the royal wing on the right and chapel wing on the left, all of which are 3-stories tall. Behind those two wings however, a single-story enclosure delineates the inner courtyard.

The keep is in the Greek cross style, a perfect square, the corner towers of which mark the cardinal compass points – North, South, East and West.

At the center of the keep is the monumental double helix stairway that allows access to each level. This stairway is one of the reasons that Leonardo daVinci is supposed to have heavily influenced the design of Chambord for such staircases were present in his architectural sketches.

The double helix stairway is a circular staircase that winds its way up from level to level. What makes it unique however is that rather than having just one access point on each level, there are two (at the 6:00 o’clock and 12:00 o’clock positions, as if looking at a watch face). This meant that individuals didn’t have to walk all the way around in order to access the stairs. It also meant that there were essentially two staircases winding around a central column. Finally, it meant that someone ascending one staircase could be at the same level as someone ascending the second staircase, without ever meeting them. 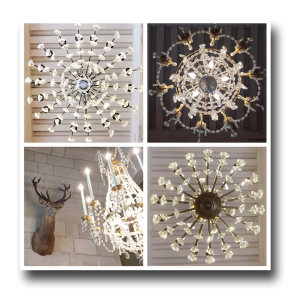 Before taking the central stairway to access the upper floors, you are first able to visit 3 rooms that would’ve originally been reception rooms for entertaining guests to the castle… a public area if you will.

The ground floor also allows you a glimpse into an 18th century kitchen with it’s large fireplace, spits for roasting and copper-ware for cooking. Interestingly enough, fish was a prized commodity on 18th century tables as it was thought that they were void of land-borne diseases, being protected, as they were, by their under-water existence.

The newly restored gardens are also accessible from the ground floor, but I’ll give you a peek at those a bit further down.

Taking the central stairway up to the first floor, one can immediately tell that they are on the what would’ve been principal private space for the royal residence. The vaulted and highly-sculpted ceilings in each of the four halls immediately off the staircase speak of great importance as compared to the wooden beam ceiling on the ground floor (visible in the ‘staircase’ photo above). 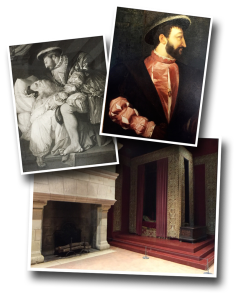 One of the main attractions on this floor is Francois 1er’s private quarters in the royal wing. It was Francois 1er who commissioned Chambord as a hunting lodge and this was his bedroom.

(Incidentally, he only spent a total of 2 weeks here!)

Born in Cognac, this 16th century King of France was patron to Leonardo daVinci for the final years of his life. Here Francois can be seen leaning over daVinci, the man he figuratively called ‘Father’, on his death bed. Surprisingly austere, this room none-the-less speaks of imposing masculinity and simplicity in comparison to many of the other furnished rooms, such as this guest room, below.

I was surprised to see a second, smaller bed (not shown), in the opposite corner the king’s bedroom. It would likely have been a bed for his principle servant, so that he’d be available whenever his majesty might need something.

I was also somewhat surprised at the number of beds that were recessed into the walls. Though I’d seen them in other castles before, this one seemed to have more than usual.

In fact, the room pictured just above is one of Chambord’s guest rooms. How’s that for a ‘spare room’?

These grand bedrooms all had their own ‘ensuite’ bathroom as well. Here you can see photos of two p’tits cabinets equipped with the famous French bidet.

This bidet is not a spot for going to the bathroom, but for cleaning up the essentials after going. It’s still common, in older French homes, to find a bidet (equipped with running water) adjacent to, or within proximity of, the toilet.

The other chairs nearby are not just for sitting… the seats lift up, exposing storage space which would’ve been used for sponges and perfume.

—- There are a number of other rooms on the first floor, including the Queen’s room and the museum of the Count of Chambord, but we still have ground to cover and I’m taking you somewhere… you need to see the rooftop, and we’ll never get there if we doddle! —-

I will however show you the Chapel, also on the first floor. Looking down from above, we are in the front, left wing now.You can see it is quite empty, but yet incredibly luminous and easily given to meditation.

It overlooks the village church and town hall which sit atop a crest and are accessible by a winding garden path..

Among the few notable furnishings in the chapel there is of course the altar and a crucifix. Between them however is a statue of Madame Elisabeth, youngest sister of King Louis XVI, with the inscription:

This declaration was not as treasonous as it may seem. She was not trying to usurp her sister-in-law’s royal authority. Rather, she was trying to protect her as an angry mob stormed the Tuileries Palace, seeking to rid themselves of the royal couple. 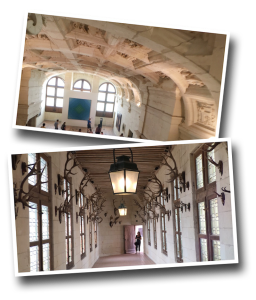 One of the first things that you notice about the second floor is the ornate decoration with which the ceilings are finished in the main hallways, adjacent to the stairwell. This unquestioningly testifies to the stature that this floor held in the overall castle. This was also a place of nobility.

These days, many rooms on this floor are exhibit spaces filled with art displays. I’ve got to admit, I didn’t take the time to see those… time was pressing and I wanted to get to the roof.

I did however take time to head over to the trophy gallery, leading from the center structure of the keep, over to the left-most tower (when looking from above), which housed the chapel.

As you can see, both sides of the hallway were lined with racks of various sizes which hadn’t just been hunted on the castle estate. There were a number of them which came from Hungary, Romania and Austria… each one identified with the year and location of the kill. Remember that Chambord was first, and foremost, a hunting lodge.

See the windowed structure in the center of this pic? It’s the lantern tower and all those windows ensure that the upper portion of the stairwell is bathed in light. The ornate structure atop the window brings light into the central core of the stairwell and soars an incredible 54m (177′) above the terrace.

Also visible in this photo are some of the chimneys that both grace and define the roofline. Popular legend says that there are 365… one for every day of the year but this is not quite the case. Still… at 282 chimneys… this castle is nothing to blow smoke at!

The circular and diamond motifs that adorn the upper structures are simply trimmed slate.

The sheer height of the chimneys and tower roofs give a light airyness to this castle which would’ve been uncommon for the heavy keep structure at the heart of its construction.

Not only will you revel at the view looking up around you but when you come to the front of the castle, you will marvel at the gardens which lie below.

Opened only in March 2017, France’s newest Renaissance Garden is a sight to behold. In the space of only three months, what I’d always known as an empty field was transformed by the addition of some 600 trees, 800 shrubs and 200 rosebushes. (To all my ‘greenthumb friends’ … How’d you like to garden on THAT budget!?). Not to mention the sculpting of green-grass arabesques in the lawn.

The entire project falls entirely within, and is faithful to, the instructions and layout given to estate gardeners in 1682 by Louis XIV.

As I prepared to take the double-helix stairway back down and bring my visit to a close I was almost hit by a pigeon in mid-flight.

I’d seen him enter the lantern tower earlier but had thought little of it as I had been exiting at the time. This time, as I entered… he was exiting and when I looked up to where he’d come from from it was clear.

Do you see it? Up above the niche, a dark collection of twigs.

I’d been dive-bombed by what was arguably one of the best-housed pigeons in all of France!

As the sun dipped closer to the horizon – and after having recovered from the pigeon-incident – I took the stairway back to ground level and made my way out.

Though the sun cast a longer-than-life version of my shadow down the top of the staircase, it was this magnificent castle that – in the space of only a few hours – had cast an even longer shadow over me than it already had.

Long a big fan of Chambord’s exterior, I’d gained insight and appreciation into its interior.

These great castles are like God and his word… there’s always a little further you can go, a little more to uncover and discover. The more time you spend… the richer your understanding and the greater your appreciation.

…au revoir (until next time)