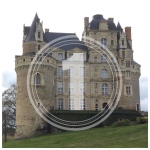 The road between Châtellerault and Angers takes you through portions of three French departments (la Vienne, l’Indre et Loire, la Maine et Loire) passing by wide swaths of agricultural land and, as you approach Angers, field after field of vineyards. For the past seven months I’ve been making the 130km weekly, with the exception of school holidays, in order to teach English at a business school there.

Each trip makes me a bit more familiar with the general surrounding and from time to time my schedule allows me to explore points of interest along the way. Regular readers will recall that I first stopped in Brissac back in January, but was unable to visit the castle as it was closed for the season.  Last week was different… last week I had a guided tour. 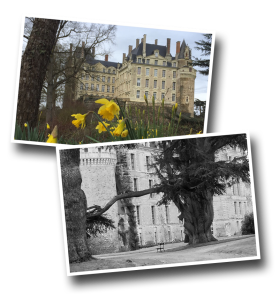 The main reason I couldn’t visit the castle in January is simple, Brissac is not a state-owned castle, like Versailles, Chambord or Chenonceaux for example. Rather, it is a privately owned castle and has belonged to the Cossé-Brissac family since May 26, 1502. The head of the family still bears the title Duke of Brissac to this day, meaning that the French nobility is not just a thing of the past.

Because it is privately held, it is only possible to tour the castle during the summer tourist season and during school holidays.

The family still lives in the castle, but occupy private quarters on the 4th and 5th floors where the public only has access to the 1st, 2nd and 3rd floors. On grand occasions, however, they still entertain special guests in the grand rooms that I’ll share with you in this post.

I won’t give you all of the information that the guide shared (he was a literal wellspring of information… a tremendous guide) but let me give some some of the highlights.

Entering the Tallest Castle in the Loire Valley

As you approach the entrance of Brissac, one of the things that you’ll notice is that there are two very different architectural styles & features visible on this, the eastern facade.

Though Brissac has belonged to the same family since 1502, it’s history goes back much further. The towers that you see were actually part of a much older fortress that was built in the 11th century. That fortress was heavily damaged during skirmishes between the French and English and, later, during the war of religion, it came close to being demolished altogether.

‘Saved by a hair’ however, major elements of the medieval fortress were preserved and the 16th & 17th century additions were built.

In addition to the markedly different style of the middle section, the next thing that catches the eye is its asymmetry. Three banks of windows can be seen to the left of the taller section with the open door.

The reason for this is simple. Work had begun on reconstruction and the plans called for an identical construction to the right of the “central” entrance, (necessitating the destruction of the towers). As is often the case with home renos, money ran out and the grand project was never completed. The castle would permanently remain in this “in-between-two-styles” state.

Perhaps one of the most curious things about this castle, from an architectural standpoint, is the point at which the two structures meet. It is this oddity which earned it the moniker:

Scroll back up if you will and note where the 11th century towers meet the 16 century central pavilion. That modern facade literally tucks back in behind the jagged edge of the tower for it’s entire height (see drone footage of it here). In fact, there are a couple of windows in the castle where you will find yourself looking out at a stone wall!

Upon entering, a checkerboard-like distribution of black and white tiles, laid out like diamonds, invites your gaze to contemplate two iron canon barrels crossed atop a pedestal set against a tall stone partition. Beyond that, a stairway leading to the second floor.

As your eyes scan the room, one of the first things you’ll notice is the magnificently intricate coat of arms prominently displayed on the left. The Cossé-Brissac motif is in the center and features three saw blades on a background of sand. The origin of these heraldic elements is as uncertain as they are unusual, but they can be seen throughout the castle.

Surrounding the Cossé-Brissac motif are heraldic elements of other noble families who became connected through marriage. Featuring these families so prominently went a long way to ensuring good family relations.

To the right you’ll be able to glance in at what was once the main kitchen for the castle and the rest of the open entryway is adorned with various trophies, hunting & riding paraphernalia.

I’ve seen a lot of ceilings “à la française” during my time in France, but never before like this.

The French-style coffered ceiling is one where exposed beams and cross-beams form a regular lattice of open boxes which are then painted and/or gilt in elaborate designs (photo at bottom of post).

This one unique because of the alternating pattern of open boxes or “caissons”.

It’s almost impossible to say what most struck me in this room, such was its beauty but – besides the ceiling – let me pick three which are visible in the photo:

Two things struck me as I entered the dining room, also located just off the main entry hall.

Note: Though I’ve included the photo of dinnerware here (Porcelaine de Sèvres, an 1839 wedding gift), it can actually be seen on the third floor of Brissac.

As we come out of the dining room, we have now seen all that is open to the public on this the ground floor.

To continue the visit, click here, I’ll walk you up the stairway to the second and third floors where we’ll experience French monarchy intrigue and reconciliation on a national scale. I’ll show you an incredible nod to the arts and tell you where hunting and femininity come together.

Thanks for visiting! See you Tuesday, March 27th. 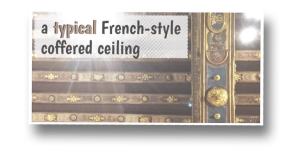 Note that the open boxes are in a longer and more regular pattern than the alternating pattern above.