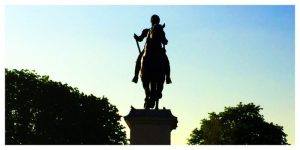 Over the next 30 days, I’m taking part in Jeff Goins’ writing challenge, the goal of which is to write daily, on a topic of your choice.  I’m writing on Short-Term Missions and will show you a bit of everything – the good, the bad and even the ugly (yes, it does exist).

Posts will be similar to my Short-Term Missions Monday posts, but shorter and will always be based on a photo I’ve taken (mostly in France).

Ready?  …. let’s talk about how your friends see your STM involvement.

They see you as a…

Today’s photo features an equestrian statue of France’s King Henri IV, and you can see it half-way across le Pont Neuf at the western tip of Paris’ île de la Cité (where Notre Dame is located).

The more often you take part in Short-Term Mission trips, or the longer you stay away each time, the more your friends look at you like we look at King Henri… like knights or knight-esses in shining armor.

Your friends know your faults and your failures as well as your talents and strengths. Somehow though, your faults and failures grow more dim in their memory. Increasingly they give weight to the fact that you’re –  (repeatedly or for an extended time) – willing to give up the comforts and stability of home to do something selfless and noble.

Many people dream of doing something like what you’re doing, whether something Christ-centered or strictly humanitarian in nature. Few however, act on and take the necessary steps to move out INTO those dreams.

Many people try it once or twice, but once they “get it out of their system” they’re ready to settle into a more traditional life: a job, a home, a family…. stability… predictability.

And for some… that’s the absolutely right thing to do.

For you however, each time you hop on a plane or send an update, a number of your friends, while missing you, will be glad for you and will add an inch or two to the pedestal that they put you on.

We don’t hold on to that honor for ourselves though. Rather, we pass it along to the one who is truly worthy of it… the Lord Jesus.

We pass it on because, if we’re honest, we acknowledge that beneath the armor is a flesh and bone human being who wrestles with fear and feelings of inadequacy at the task before us. We  know our frailties and our weaknesses, and it is for this reason that we must daily put on the whole armor of God (Eph. 6.10-20).

Our friends will see us as knights or knight-ess regardless… but if, and only if we put on the armor of God – wrapping ourselves in him – will we have any hope of truly being what they see us as.

God bless you as you arm yourself, to serve him,
in Short-Term Missions.