12 years and many hours of study later… we have a graduate. Wearing her blue cap & gown, Soph felt she “looked like a pillow”… but what a pretty, intelligent, Christian “pillow” she is.  🙂

A lot has happened over the past week, so I may split things up a bit and run it into next week’s post, but for now at least… the spotlight is on Soph!

For those of you unfamiliar with homeschool, Sophie has never attended a traditional public school. All her learning has taken place at home with a number of different curricula. In grade 5 she began using the Abeka Academy curriculum and in 2013 moved into the accredited, DVD-based program. Pre-recorded lessons are taught by teachers at Pensacola Christian Academy, tests & homework are administered by Liz and corrected according to a clearly laid out marking guide. Some work is sent directly to Abeka for correction and each year Soph had to sign a solemn declaration indicating that she’d watched all lessons and completed all work. It’s a rigorous program and this year, the accredited program was followed by over 20,000 long-distance students from around the world (There were over 60,000 students in the program in total).

All students who have completed the accredited program are able to march in the grad ceremony and this year 510 came from around the world to do so. Soph was among those who traveled the farthest (others came from the Philippines, India, Columbia & Japan… to name a few).

I was amazed… the commencement ceremony ran like a well-oiled machine and everything (president’s address, academic awards, and presentation of diplomas) was completed in less than an hour and a half! (my grad ceremony, of 400+ grads took at least 2.5 hrs… so I had prepared the boys for the worst!).

Soph was also part of history as this was the first year that the blue gowns were used… the change coincided with the 30th commencement ceremony for this particular program.

Soph and her teacher extraordinaire!

She’s the star of the selfie-show! 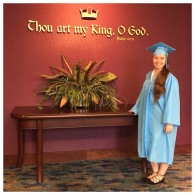 They had flags from the states/countries of each graduate.

We are extremely grateful to Bro. & Sis. Kinsey as well as Bro. & Sis. Stroebel of FPC Pensacola who facilitated our stay in the Pensacola area. Not only did they allow us to use their evangelist quarters, but they went over and above to bless us during our stay.

Given that our Sunday services with them were our first Sunday back in North America, and given that we’d been working in a small, home-missions type scenario for the past 3 years, it was a real refresher to spend Sunday with them.

Evangelist Jon Welch ministered in both the morning and evening services and I sure enjoyed the soft-spoken assurance with which he ministered.

In the evening service we were also treated to the music ministry of the Texas Bible College chorale as they wrapped up their summer chorale tour. This allowed us to visit with #AYCFrance2015 AYCer Hallie McGee and Megan Argueta.

Hallie & Megan weren’t the only two AYCers that we were able to see while in Pensacola… we also got to have supper with Chad & Destiny Eckert who treated us to a healthy feed of good ol’ Louisiana crawfish!  We’d never eaten that before but they’re essentially like tiny little lobsters.

How great it is when God establishes relationships which, even though paths don’t cross often, are a pleasure to rediscover even years later. The family of God is a special thing!

Our last stop before leaving Pensacola was the famous Pensacola Beach. It’s several kilometers off-shore (you cross an island and 2 bridges) and really isn’t much more than a long, developed sand dune. The sand, however, was as fine a sand as I’ve ever encountered… just beautiful!

In France – although we weren’t there, it was the annual Pentecost Weekend Convention and the main speaker this year was Rev. Bruce Howell, Director of Global Missions for the UPCI. We love Bro & Sis Howell and were sorry to miss their ministry but first thing’s first… and Sophie’s grad (on the same day) came first. Twelve people experienced Pentecost for the first time and were filled with the baptism of the Holy Ghost as in Acts chp. 2. Awesome news and this year we celebrate with them from a distance!

That’s all for now…

Thank you for your prayers & support.
Remember us in prayer today as we start traveling back towards Canada.
God bless you!