So it’s perhaps unusual, if not at least unexpected for me to include the Hebrew letter Lahmed as today’s feature image. There’s a reason & I’ll get to it, but for now be it known that we made it safely back to our home-not-home in western France.

As you know, if you’ve been following the blog for a while, Montreal is always a “boost” for us. The kids get to spend time with good friends (as do we) and we are lifted up spiritually.

This time was no exception.

Our visit coincided with a visit by the prayer team from Louisiana, led by Pastor Derald Weber, of Lafayette. He would only be preaching the evening service (as we awaited our flight) but we did get to sit under the teaching of Pastor Ronald Melancon of Thibodaux, LA. It was great ministry that blessed us and was an encouragement as we returned to France.

The Lord always knows just what we need.

The time came to head through security and aside from one little hiccup (Timo had two small pocketknives in his carry-on)… all went well. 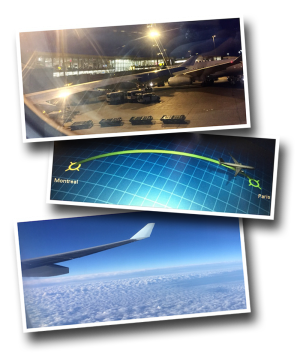 I like to call it cloud-surfing… and I could do it just about forever! 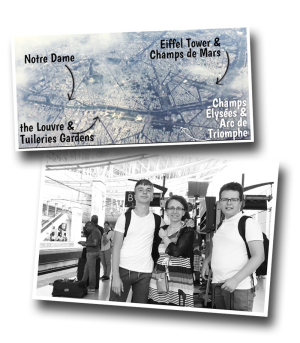 We arrived to great weather and were even treated to a fly-by of downtown Paris. If you click on the photo for a slightly bigger view, not only will you see the four main attractions indicated, but you’ll also get a good view of Paris’ many bridges.

Once on the ground, we experienced two things that had never happened to us before in Paris…

Thank you Lord for the quick turnaround!

From there we collected our bags and made it to the train station where we would separate once again. Liz & the boys would head to Châtellerault by train while Sophie & I took the car, the dog and the majority of the baggage. A train delay allowed us to make it home first and so we could collect them at the station.

Home at last!
(Now to deal with jetlag … which has been way more difficult than other times!)

So what’s the deal with the Hebrew letter lahmed?

It came up during our quiet time this week while reading Johnathan Cahn’s “The Book of Mysteries”.  He highlights the prefixive use of the letter which translates to “to” or “for” ... designating the goal of an action as well as its object.

In short, Cahn says that the verb “to have” doesn’t so much exist in Hebrew the same way it does in English…. meaning that we don’t necessarily “own” or “have” possessions… rather they are “to us” … loaned to, entrusted to …. they are God’s blessing to us. Rather than own things… we are stewards of them during the time allotted.

Looking around us with that in mind, we can easily recognize the number of things that God has entrusted to us… our family members, the things in our house, our yard & driveway, our bank account, etc. It reminds us of our need for gratitude on so many levels.

Thank you for following our comings & goings….
Now… time to gear up for the heat wave that Europe is currently experiencing!

God bless you today as you think about all the things and people that God has entrusted to you!

(The moment the clouds broke over Paris)