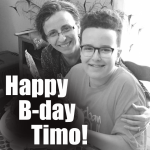 I never quite know how to refer to it. On one hand, it is the French national youth convention, but it’s also somewhat of a de-facto European youth convention as well, given that people come from all over!

Without question… it’s well worth their travel!

Last Saturday we hopped in the car around 9:00am – dressed for church and ready for a 3.5hr drive. It rained the entire time so the drive was a bit of a chore but we got there well in advance of the first service –  2:30pm. We would hit the road home less than 24h and three services later!

As you’re aware, one of our areas of involvement is teaching in the national Bible School.

This year we had twelve students graduate from the program. Because it is a transition year, some of the students had done three years and others, two.  These are well-grounded leaders, all of whom are already serving in their local churches.

It was great to have Bro. Josh Carson back in France. We first met he and his wife back in 2015 when they co-chaperoned the AYC trip that we accompanied.

The kids enjoyed seeing him again and benefited from the ministry of a familiar voice. Whenever Bro. Carson has crossed paths with our kids – (2017 in Indiana, this summer at MK Retreat in Florida and again last weekend) – he purposefully connects with and loves on them.

That’s awfully impressive from where I stand. He constantly criss-crosses North America and connects with thousands of youth… yet he takes time to keep it personal. Awesome!  We thank the Lord for he & Sis. Carson and their ministry!

We also got to (finally) meet fellow Associate Missionary Allison Mitchell who serves in the U.K., pastoring a military congregation. She’s been in missions for 11 years. Previously we’d only known each other through social media… soooo nice to finally meet!

Shout out to the Birthday Boy!

As of Wednesday, we were officially out of the tween-years and fully into the teens!

Since Wednesdays are only 1/2 days here, in terms of school, he had several friends bring the bus home with him, eat lunch together here at the house and spend the afternoon together.

They watched a movie and Timo chose “Facing the Giants”… sowing seeds in the hearts of his friends.

We were able to have a good conversation with one of the parents whose wife is going through some significant health challenges and remind them that God’s mercies are new every morning… giving the strength that we need each day.

It may seem insane to launch another book so close to last week’s launch of the second Paris book (and perhaps it is)…. but this is the one I was working on last summer while we were home and I wanted to have it out and available.

This book was essentially written by my grandfather in 2006. My grandmother had just passed and I gave him a nice journal in which to record memories of family traditions, history, etc. so that they would not be lost to our family.

He went a little further and also talked about life in rural New Brunswick, growing up between the wars and the simple pleasures with which people occupied and entertained themselves. It’s a neat little book which, thanks to digital & print-on-demand technology, can easily entertain a wider audience than just our family.

… a couple of reasons really.

Short-Term Missions Success is a way for me to share what’s been a truly life-changing path for our family and to help others experience it as well.

Paris 3 Days No Stress and Paris You Take My Breath Away allow me to share my limited knowledge of, and appreciation for, a truly beautiful and breath-taking city. (“3 Days” is more for planning a short visit whereas the second Paris book is simply a book of short stories.)

Finally, McKee’s Mills Memories began simply as a way to share my grandfather’s memories with the rest of the family. Given that there’s so much local history in there as well, however, it may also be of interest to a wider Kent-County community.

Our finances continue to be very limited and the cost of living has gone up faster than our monthly support. For example, it costs roughly $30 CDN more to fill our gas tank than it did when we first arrived, not to mention having two boys in orthodontics.

Selling books, therefore, is an attempt to add one more arrow to our financial quiver along with my teaching and Liz’s translating. We are not in a position to deputize for a couple of years (nor would we want to introduce a 2yr disruption into our kids’ schooling, friendships, etc. – that would be academic suicide in the French system – not to mention that it would leave the local church leaderless).

If any of these books might be of interest to you, a friend / family member or someone you know… they would make an inexpensive gift and the proceeds would offer stability to a small French church and to our family.

Thank you for spending another few minutes with us this week.
Let what you read inform your prayers for us and for France….
and God bless you as you do!