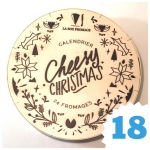 Today’s cheese was another of the stinky persuasion… but we weathered the storm better than expected really.

Perhaps we’re getting accustomed to all these ‘little stinkers’. One has to wonder… is that a good thing or a bad thing!?

(Wondering ‘Why the daily cheese posts?’… read this 🙂 )

If you have been following along our Cheesy Christmas posts, you’ll remember that a few days ago, on Day 14 to be precise, we’d tasted a particularly strong-smelling (& strong tasting) cheese… the Pont l’Évêque. In it, I did a quick run-down of a few sites that listed what they considered to be France’s smelliest cheeses. Well, in addition to Pont l’Évêque, Munster also appeared on a couple of those lists.

Cheese quote of the day

“Meself I like a breath of air before I go to bed, same as I like a bite o’ cheese or something before I take me teeth out.”