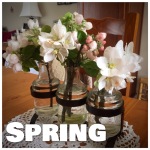 Today’s feature image shows apple blossoms from our yard in a little trio of vases.

You know, by now, that I love the garden and I love to bring a bit of the garden indoors on just about any day when things are growing or blooming, but apple blossoms even a bit moreso.

My maternal grandmother passed away at the time that the apple trees were in bloom, and I remember bringing a large vase-full of blossoms into my mom’s house to brighten things up. It was probably the first time I’d ever put together a bouquet of apple blossoms… I mean… who does a bouquet with branches as opposed to stems!?

Well… it worked, and since then, bouquets of apple blossom in the Spring are always welcome.

Care to take a look back at March?

Just a few days after the last time we sat down together, we celebrated Liz’s birthday.

It was strange to only be three as opposed to 5, but I suppose it’s a precursor of things to come. With Sophie in Romania and, at the time, Dominic in the USA for a friend’s wedding, it was just Liz, Timo & I.

We went out to a local crêperie and dined on crêpes both savoury and sweet. We’re not frequent restaurant goers, so the simple & laid-back atmosphere of the Crepier Breton* was fine.

*Crêpes are a specialty of the Brittany region, in France’s north-west.

A Taste of the Sahara

Did you hear anything about Sand from the Sahara blowing over Europe a few weeks ago?

We hadn’t heard that it was coming, but one morning we woke up to car windshields that looked like this. In fact the whole car was covered.

There was a massive cloud covering most of the country for 2-3 days and on the last day, not only was the sunset amazingly beautiful, but it clearly revealed the clean edge of the cloud.

… it really has; and it’s a welcome change from the grey of winter (though, given we don’t get snow… I’ll not complain too much about the winter months.).

Here are some tulips & narcissi from the garden as well as our ‘red william’ pear blossoms. It looks like I might even get some early clematis montana rubins blossoms this year (the snails ate every last blossom last year – it was a much more damp Spring).

February & March were fairly warm but so far, April has been significantly cooler and there was a record set the other day for the coldest day in April since 1947: -9˚C (16˚F) in one spot in the north-east and -4˚C in our area.

While it’s not all that cold for a Canadian, the fact that fruit trees and vineyards have already blossomed & budded… it’s potentially devastating. Owners have to light fires in small barrels every few meters over the area of the vineyard / orchard in an attempt to create a micro-climate and raise the temperate 1-3˚. It’s quite a sight.

It took a little bit of doing to get back into the swing of yard-work at the church but we’ve already mowed twice and worked to clean up the mess left by moles (a vast network of molehills across the lawn).

We’ve had some great services of late as well.

Back in March, some of the youth from Bordeaux came up for the weekend, and it was like an extended youth meeting for two and a half days. They took part in service on Sunday and a couple of them spoke, including Dominic.

We’ve had missionary Paul Brochu with us and this past Sunday, Luis Soto was with us from the Melun church. He is a former youth president for that church so a well respected young man who has already invested much into the kingdom of God.

It’s been good to have a bit of extra help the past few months. We realized, back in the fall, that it’d essentially been our family doing just about everything for the past several years (music, ministry, Sunday school, etc), and it’s not been healthy.

On one hand, it’s part of the church-planting life, but it also needs to be managed a bit better than it has been. We’re working toward balance.

Here are a few specific things to pray for at present:

We’ve finally had some ‘April showers’ … both literally and figuratively.

Literally… in that we’ve had several rainy days this week (we’re about at 1/3 the normal rainfall / groundwater levels for this time of year)… so we’re anticipating the May flowers that follow, according to the saying.

Figuratively… in that we’ve had this extra support, ministry-wise, over the past few months, and are glad both for the rest that that brings but also for the promise of what the Lord has yet to bring.

Thanks for stopping by today.
The LORD bless you!