“Lyghtly whan one wynneth, an other loseth*” is an old English expression from the 16th century that you have likely never heard before, although you’d know it’s modern equivalent:

“One man’s loss is another man’s gain”

That was the case on the last Sunday of March when yet another late-winter (technically early-Spring) storm buffeted the province of New Brunswick, dumping some 45cm of snow in the Perth-Andover area. For this reason, career church-planter Scott Sistrunk, rather than heading north, remained storm-stayed in Saint John after a planned morning service and lunch-learn with local church leadership. 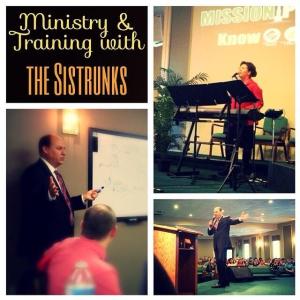 During the morning service Sis. Sistrunk sang and Bro. Sistrunk preached on the 5 people that you will find in every great church.

Following an incredible morning service and time at the altar, he shared with our leaders, “The Engine of Church Growth”. Discussing key points and processes that are absolutely in place in every church where growth is occurring (when an organism is healthy… growth occurs naturally), including potential fail points and what some of those processes look like in churches of differing sizes.

Given the fact that the Sistrunks would be in town for an extra evening and we were not having service that night, we had the opportunity to have supper together, and by the time we wound down, we were about 15 minutes shy of 3 hours! Where had the time gone?

Bro. & Sis. Sistrunk had been AIMers in South Africa during the mid-1990’s so they could appreciate some of the planning that we were in the midst of as well as some of the questions we had… yet by the same token, they could also relate to the eager anticipation that we feel as well… the desire to lift up the name of the LORD in the land to which we are called, for the time appointed. 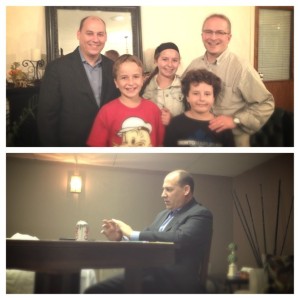 We discussed AIM in general, preparation for such undertakings (spiritually, financially and family-wise), VISION and execution of that vision. There were a couple of “God-moments” during the discussion and doors opened for future connection.

It blows me away that, because of a series of decisions to follow the Lord and His will, I get to rub shoulders with the incredible people that I do on a regular basis (beginning with the local church and it’s leadership).

“Lord, make and mold us after your image so that we can take what you and others have invested in us, and be profitable for your Kingdom.”

The first time I’d ever heard of the Sistrunks, they were being interviewed by Rev. Carlton Coon on HMLive.  (a webcast which has since been renamed Mission North America Podcast). They have spent twenty-seven years in the Metro Detroit area and have planted six churches to-date with a seventh to begin later this month.

If you’ve never heard or seen Bro. Sistrunk minister, check out a few of these links: