*Sorry folks… usually my midweek post falls on Wednesday, but it occurred to me that I’d not “bumped” this one from saved-draft status to scheduled status… so it didn’t publish this morning.*

I’m feeling something that I haven’t felt for a while… it’s both familiar and rather new at the same time.  Let me give you the background.

Visit to the Family Doctor

Last year at about this time, my family doctor did the run-through and indicated (in no uncertain terms), that she would like to see me lose 10lbs because it would be better for my overall general health & energy level and would set a good example for my family.

I’m neither dangerously overweight nor even close to being obese, but there are several inches and pounds that could be shed and I seriously wouldn’t miss them. In younger years, I could eat whatever I wanted in just about whatever quantity I wanted and the scale wouldn’t budge from 145lbs… then the upper 30’s hit!

In my most recent visit to the doctor, in preparation for our departure to France, she noted that while I’d gotten the 10lbs-thing right… I’d headed in the wrong direction… gaining since last year rather than losing (she was not impressed).

So since then, I’ve been eating less. And I’ve experienced a feeling that I’d not felt in a long time. Hunger.

This has been my rhythm for the past few days:

Overall… the quantity of food has diminished and I’ve been better about not snacking on junk. which leads me to this strangely new (re-discovered) yet familiar feeling in the pit of my stomach… hunger.  It’s kind of odd to feel that feeling, yet it’s surely there. The growels can attest to that.

…and in an odd way, it kind of feels good.

Hunger is something that is, by and large, absent in most of the homes & families that I’m connected to on a daily basis. Generally speaking, we. have. plenty!

We satisfy our wants before our needs.  In this manner, hunger is masked by shallow satisfaction, and true nourishment is sidelined in favour of the sweet & salty snacks. 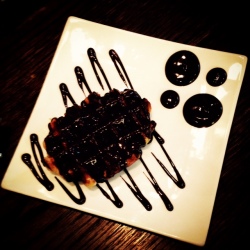 C’mon. Don’t act like that’s never happened to you!

Have you ever felt the same way spiritually?

There’s a hunger there deep down inside…

But we’re not always satisfied.

Could it be for the same reasons as outlined above?

We know what will truly satisfy our hunger, but in the meantime, there’s a snack over here and a treat over there. Something that will temporarily abate the hunger and take the edge off… “dulling” the pangs so that we don’t feel them as keenly… but it doesn’t really nourish, give our bodies what they need.

There’s something actually kind of nice about feeling a hunger pang or two. It tells me that I’ve not over-eaten... and have you ever noticed that when you’re truly hungry… healthy food tastes better… you’re glad to have it?

…for stopping by again today!
My wish for you?

Both physically and spiritually!
Don’t kill the hunger!