(Note: I am the guy who originally resisted digital photography, scoffing at those who stored all photos on their computer, rather than in a handy-dandy “hard copy” photo album… Now, I have joined your ranks… with nearly 20K pics on my hard drive… end of admission) 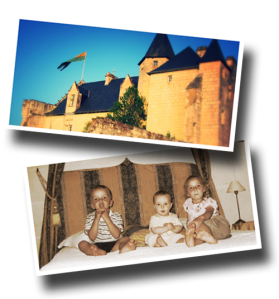 The first time that we visited Châtellerault as a family was in 2006. I had been there previously by myself and then with a friend, but in 2006… we went together.

Timo was not quite a year old and still had be propped up with pillows or be sandwiched between his siblings in order to ensure a steady pose for the camera.  We stayed in the 15th Century Château de la Motte Usseau for a couple of nights and enjoyed the comfort of the Ysabeau de Poitiers Suite… where   we could have our own lovely room and the kids had their own spot right through the large arched doorway.

If you’ve never done a chateau-stay before, you need to give it a go!  Seriously… you’ll pay 130 euros/night in the equivalent of a “shoe-box” in Paris… or, for less than that, you get a 15th century castle in the country with incredible hosts and a breakfast fit for a king (or at least a count)! 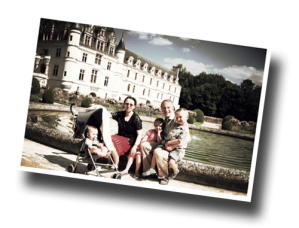 During that trip, Bro. & Sis. Brochu also took us to visit the Château de Chenonceau which is reputed to have the 2nd or 3rd highest number of visitors of any monument in France, only behind the Eiffel Tower and Notre-Dame cathedral… both in Paris. This Castle, one-time home to Catherine de Medicis and her rival Diane de Poitiers, gracefully spans the Cher river.

We visited church the Sunday morning of our visit and at that point it was still meeting in the home of Sis. Cécile Leday on ave. Aristide Briand, right downtown and not far from the monument to the French Revolution. Twenty or so very basic chairs were set up in the Living Room and a simple wooden cross adorned the wall above the unused fireplace. A music stand served as the pulpit and the only instrument was a keyboard in the corner. There was nothing all that fancy about it, but we felt the presence of the Lord… we were worshiping God, in French, in the heart of western France.

For those of you who are wondering what the area will be like… take a look at the picture to the right. This photo is taken from atop the Château de la Motte, looking out over the rich agricultural land that surrounds Châtellerault.

You can barely make it out, but behind what looks to be a hedgerow in the middle of the picture, is the A10 highway that leads from the North down to the South-west of France… present, but barely visible.

This is the area that will be home for us beginning in the new year… and we can’t wait!

Although it looks pretty deserted in this picture, remember that the city of Châtellerault itself is a city of roughly 27,000 people and that, within a 25km radius there are some 94 villages… all of which house souls, some of which are hungry and/or hurting… not completely satisfied with where they are spiritually.

It is for them that we are leaving home & homeland.
Please pray for us… for them.
Pray for #Revival_inFrance.

Thanks for stopping by today… I appreciate your visit!