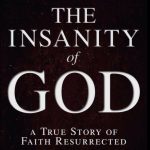 “But the honest truth was that sometimes, more often than I wanted to admit, when I was on the ground in the Horn of Africa, horrified by the overwhelming needs that I saw all around me, I couldn’t help wondering if my efforts… were actually making any difference at all.”

The Insanity of God:
A True Story of Faith Resurrected

This book came to my attention some time ago, via a blog post by Bro. James Poitras. Given the $1.24 CDN price tag for a Kindle download on Amazon.ca (likely a 99-cent daily-deal on Amazon.com) it was an easy decision. I started reading it last week and all 323 pages were completed in just four days.

Nik Ripken takes you from his conversion to a lengthy missions tenure in Africa and the pivotal role they played during the 1990s Somalia Crisis. His goal was to share his faith, but this proved difficult in the largely Muslim nation and was a major source of frustration and discouragement. When a traumatic event saw them return to North America for an extended furlough, he began to study how Christians and Christianity not only continued to exist but even flourished in places like former Soviet block countries, communist China and elsewhere in South-East Asia, despite fierce opposition. He found stories of miraculous deliverance, protection and conversion which breathed new life into his own relationship with Christ. 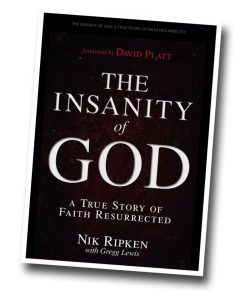 A central tenet of the Christian faith can be found in Matthew 28: 19-20

“Go ye therefore, and teach all nations, baptizing them in the name of the Father, and of the Son, and of the Holy Ghost: 20 Teaching them to observe all things whatsoever I have commanded you…“

“How do we obey and accomplish the Great Commission,
despite our own doubts, fears, inhibitions or unique context?”

Alternating between telling the story from the past and unpacking events & implications in a “past-present”, it is easy to maintain interest. You’ll be hooked into what is happening in a given chapter, then he’ll begin a new chapter and make you wait until the following chapter to pick the story back up.  This also avoids overloading the reader at the end: you can digest the lessons learned in bite sized morsels, leading you gently through his own learning process and inspiring you to greater levels of faith and dependence on the Lord.

I didn’t purchase this book because I was looking for “resurrected faith” as is referred to in the subtitle, rather, if it was challenging James Poitras… I wanted to be challenged as well. From the outset though, this quote grabbed my attention:

“I was stunned when, despite what I considered to be a life of sacrificial obedience, I could point to very little in my ministry that was “effective.” There were simply no results to measure. And success was a word that I would have never used to describe what I had done.”

I have felt like that. Sometimes we don’t see growth as we typically define or envision it. Immediately I knew that the book would have more to teach me than I’d suspected; Ripken had walked where I had walked.

My takeaway: We do our best to exercise the verbs of the Great Commission: Go, Teach, Baptize and the implied Obey all the while forgetting that Jesus also says:

“lo, I am with you always, even unto the end of the world.”

If we try to do it in our own strength… we will tire and get discouraged. If we remember, however, that He is with us… it becomes easier to take the next step despite the fear, fatigue and frustration.