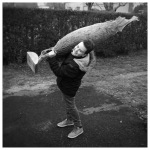 So we have gotten used to doing something that we never ever did in Canada… buying our tree from a store… Early on in our married life and even when the kids were small, we’d go cut one down from a tree farm or, on the odd occasion, out in the woods. Then we took the plunge and went artificial. Here though… options are few…

But let me step back a bit…

One of the big stories this week was marking semester tests for two of my English classes. I’ve mentioned before that as a way of getting connected to a wider group of people, I’ve been teaching a few hours of English each week, since January. 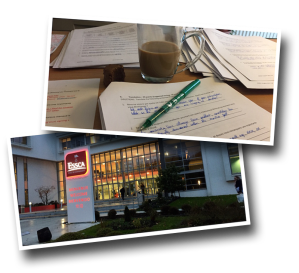 I spend 3h/week at a business school and 4h/week in the performing arts department of a nearby university.

God has blessed greatly with these two open doors. Yesterday was the last day of the semester for two groups and they hung around the class just talking for a good 20 min. We’ve had a couple of great conversations. 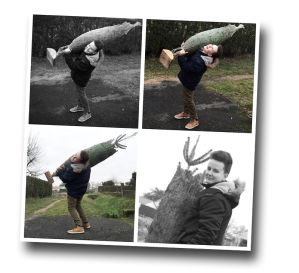 I mentioned above that we grabbed a tree this week. Timo has become the official tree-picker-outer (& -upper). He claimed the title because, as he points out, we stopped chopping down real trees when he was just a baby, so he has ground to make up.

Trees are smaller here than at home – this one is about 1.75m (or roughly 5 and a half feet). We’ll decorate it in the coming days.

Our home church started livestreaming services and we took an evening this week to watch the Sunday School presentation… sooooo cool to have that connection back home, see some of the kids we know & others we’ve never met. Our three were glued to the laptop screen cheering them on! 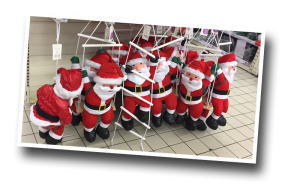 Generally speaking house decorations are a far cry from what is common in North America but this one takes the cake.

It’s Santa, climbing a ladder, and he’s normally hung from a balcony or a window ledge. It’s almost like the French never bought into the whole sleigh-pulled-by-reindeer-landing-on-the-rooftop thing, and instead, he tries to sneak in wherever & however he can. He’s breakin’ in EVERY-where…. So funny! 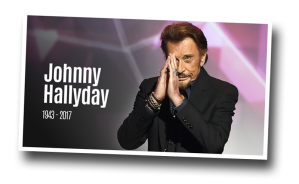 England had Beatle-mania,
the USA had Elvis,
and France had Johnny Hallyday,
…until earlier this week.

Today will be a zoo in Paris as 600 Harley Davidsons accompany his coffin down the Champs Elysées. Trains from the south of France were completely booked yesterday and charter busses were scrambling to add trips to Paris as tens of thousands of people try to make their way to the capital to help “escort Johnny to his final resting place.”

He is certainly a popular-cultural icon but it’s a bit strange to watch the emotion surrounding his death and the sacrifices people will make in Johnny’s honour. Most of those same people would show no emotion and make no sacrifices to honour the Lord Jesus who died for their sins to open a possibility of eternal life with Him.

I serve a God who died, yes… but who rose again, who lives forever and who invites you and I to be part of that. As much as I recognize the cultural contribution of this man to national identity… my honour, my emotion and my sacrifice are directed to a much higher figure.

This is a Bible school weekend so both Liz & I will be teaching today and heading home tonight. Pray for safe travel and for God’s spirit to move on our Bible School students. In fact, while thousands are in Paris honouring a rock star, these students will spend their lunch hour evangelizing on the Christmas market here in Melun. They are awesome!

God bless you as you go through your day. Be sure to direct your strength and energy to the One who is truly worthy of it today… you will be much the better for it.