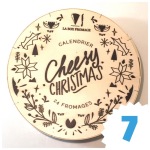 I won’t hide it… expectations were high for today’s cheese, because we’d had some Livarot in last year’s Cheesy Christmas parade of cheeses and it got high marks…

The pressure was on…

Hard to believe we’ve already been doing this year’s Cheesy Christmas for a full week.

That wasn’t the only reason to celebrate today… “Pearl Harbour Day” is also mom’s birthday (which she happens to share with Crown Princess Amalia of the Netherlands). Agh… We’ve not been able to spend her birthday together since 2018. when she arrived in France for a month-long visit on the actual day of her birthday.

She went home in January of 2019, fell in love via a blind-ish date, and got married in July of that year. Oh the difference a few years can make. She won the lottery with Ed… he’s wonderful and they make a sweet couple. 😍 🥰

Now… onto the Livarot

I must say, I was a little apprehensive upon unwrapping it this year. You see that line across the middle of the wedge. To me, that looks like part of it had been left exposed to the air longer than it should have. Not that it spoils, necessarily, but it had a bit of a rubbery film. Hmmm…

Of course, the film is just that… a surface film that can easily be removed, but when the pieces are small to begin with, it’s a bit disappointing to see that as well.

Still… let’s not judge a book by its cover just yet. Let’s dive in…

Cheesy quote of the day

“In 1546, author John Heywood wrote in “Proverbes” that
“The moon is made of a greene cheese.”
But in 1546 greene meant new, unaged, not green in colour.”

See you tomorrow for cheese #8