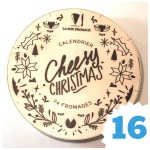 We’re well beyond half way through this year’s Cheese Christmas.

I’ve got to say, up to this point, and generally speaking, we don’t seem to be quite as impressed with the Cheesy Christmas product offering as we were last year.

That’s not a comment on today’s cheese which, in fact was a hit… but it’s just a general observation now that we’re this far in…

One of the reasons I say that is this… of the 24 cheeses that we will have received, by the time we’re through, 10 of them will have been repeats of last year. While that’s still less than half, don’t forget that we’re in a country that General deGaulle referred to as having some 246 varieties of cheese. You’d think that with so many, it’d be possible to introduce a bit more variety.

The other thing is, several of those repeats, up to this point, we’ve not enjoyed as much as we did last year. Hmmm…….

Anyway… again, this is not a reflection on today’s cheese let me get to that right after this quick…

Reminder: Just a reminder that for days 11-16, as I mentioned on Day 11, while the posts appear in order on the blog there was actually an interruption for a couple of days. Today’s cheese was tasted on day 16, and I’m posting about it a couple of days after that to get caught up.

Thanks, Brebis Basque… for redeeming the evening!

Cheese quote of the day

To continue on from yesterday’s ‘cheesy’ groaner-humour, a slightly revised version of Lionel Ritchie’s 1983 hit (ironically, yesterday’s Eurythmics song was also from 1983)…

“Hello… Is it Brie you’re looking for?”