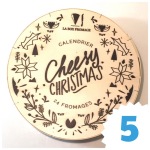 Today’s the day that Christmas came to our house.

As is often the case on Sundays, we dinner was the big meal of the day, after church, and Liz’s beef bourgignon was a treat that made onset of the Sunday afternoon nap come even more quickly.

When we awoke, it was time to set the tree up…

Company for the Christmas Tree

Sophie had a friend over – Chloe is becoming a little bit like an honorary Long, as proved by the relentless teasing she endures at Timo’s hand from the moment she arrives.

Since there were 4 of them swarming the tree, Liz went about setting up other decorations & cards & such, while I headed into the kitchen to make some eggnog. It was a near daily part of our Christmas season back in Canada, but you can’t buy it in stores here and it’s too much work to make all the time, so it’s become a real treat.

This was the first time I’d made it where you beat the egg whites separately, then fold them in. Like cappuccino foam, the egg whites invariably made their way to the top, making it as much dessert as drink.

Here’s the recipe if you’d like to try.
(I did the non-cooked version.)

Now… on to cheese!

The Cheese quote of the day comes from American actress Billie Burke (1884-1970).

“Age is of no importance unless you’re a cheese.”