A weekend in “The Word” is what we had in the city of Montreal!  For that was the theme of the 2014 French Evangelism Conference (FEC) at the Église Pentecôtiste Unie de Saint-Laurent, pastored by Rev. Dieudonné Kahozi, under the oversight of Bishop Rev. Paul Graham.

Services began Thursday and ran until end-of-day Sunday. We were privileged to rub shoulders with fellow guest-speakers:

This was the first time I’d heard Bro. Agba and Bro. MacKenzie minister (although I’ve known of both for quite some time).  Bro. MacKenzie was the youngest of the group, but I can tell you my esteem for him increased yet more: What a profound young minister!

It was the second time that I’d heard Bro. Sagil minister and as I said to a couple… it was like trying to eat a steak with no bone, fat or gristle…. 100% pure meat!  Incredible. So appreciative to spend time with such high calibre men.

As for Bro. Kahozi… there’s no question. Friends for a long time, he is doing an incredible job there in Montreal. There were 534 in service on the Saturday night service. A record for any French meeting in North America. God is raising up a French church in that city!  All in all… 28 people were filled with the Holy Ghost and 18 were baptized in Jesus’ name.  AWESOME!!

Our kids are homeschooled using the DVD curriculum from Abeka Academy  requires that they use a laptop computer. The ones that they’ve been using are roughly 8-10 years old and just before we left for conference, one gave up the ghost completely. Hoping to buy a new one before leaving for France, the 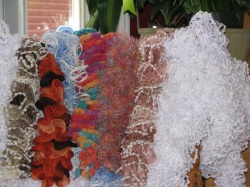 kids were selling scarves that they’d knitted a while back (they probably sold $200 worth this weekend alone).

Bro. Kahozi indicated that Friday night he’d do a promo of the scarf table to let people know what it was for. In addition to doing that however, he took up an offering solely for the kids’ computer need. Over $1,700 was collected and we will easily be able to replace both of the old laptops. Thank you Pastor Kahozi… what a blessing! 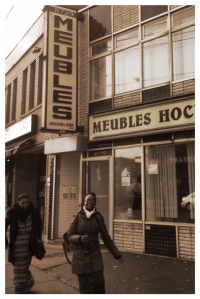 Sunday morning we attended one of Saint-Laurent’s daughter works… Église Pentecôtiste Unie de Montréal Est. I’d been there several times but it was a first for Liz and the kids.

They meet in the old Meubles Hochelaga building: nicely done inside, but they have yet to change the signage. It’s a young church with young teenagers playing music and twenty-somethings doing just about everything else. That morning 2 young people were filled with the Holy Ghost for the first time – after having attended for only about 3 weeks.

Our main task for Monday was to visit Montreal’s Italian Consulate to get the kids’ passports.

Oh they do have Canadian passports already, but because Liz is an Italian citizen by birth and since, upon their births, the kids were registered at the consulate; obtaining Italian passports is simply a question of paperwork, which Liz had done in advance. We only had to show up with photos, sign some “autographs” and wait. In fact we were in and out in less than an hour… passports in hand.

Then, we celebrated with chocolate covered waffles at Suite 88 Chocolatier on de Maisonneuve. o. my. goodness.

As I write this… my head is still somewhat in the cloud given that we spent just over 10hrs on the road, driving back. Just under two months to go and there’s still a lot to prepare. We appreciate your prayers for the sale of the house – and other preparations.

We’re excited about what God is going to do!