Any of you who are connected to us on Facebook or Instagram will already be aware that Liz & I celebrated our anniversary this week. That was, without question, the highlight of our week…. even moreso than realizing that we have now been in France for a full 6 months!  Where does the time go? 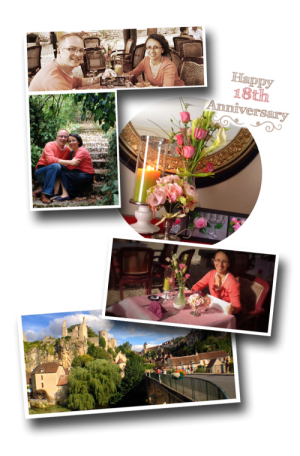 We knew that our anniversary would fall on the Sunday, so on Saturday evening I’d planned a little surprise for Liz.

That morning I drove out to Angles-sur-l’Anglin with some flowers, a candle and a card. The restaurant would then do the rest. I came back home, got cleaned up and then together, we went  out to spend the afternoon discovering a truly lovely little French provincial town.

When we arrived at the restaurant, at 7:00pm, there was no question which table was reserved for us. Not only did they set out the flowers & fixin’s, but they’d added a table-cloth & fancy napkins. We sat beneath thick, leafy trees on the tiny public square in the middle of town. At least twenty other small bistro tables around us, but ours was the only one “dressed for the occasion”.

We spent the next 3-hours… yes, three, having a simple & leisurely dinner at a little crêperie (la Crêperie d’Angles) so the fare was light… but also laid back. It’s actually pretty rare that Liz & I have a chance to be alone so this was a treat.

A major part of Proverbs 31 is dedicated to describing the virtuous woman. Verse 28 says specifically (in response to all that she is and does) that “her husband rises up and praises her”.   It was a chance to, privately, recognize the value that she brings to my life. Her strength is incredible – although she likely wouldn’t say that. She is an incredible lady and contributes greatly to the ministry here in France.

Something else that doesn’t happen all that often is a chance to meet with the other missionaries on the field.  Given that Pastor Nowacki would be leaving to head back to Canada during the week, we pulled together a last-minute meal on Sunday evening. Liz and the kids and I drove to Melun following our morning service and got to dine with:

(Later in the week, we also got to dine with missionaries Marcus & Renée Brainos who have just returned to France following their deputation and are settling in to start a church in the southern city of Nice.) 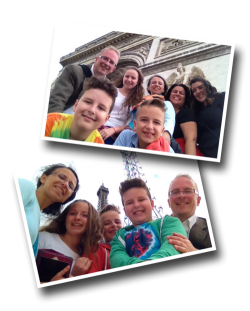 Monday morning we had breakfast at the hotel with the Wallaces before heading into Paris for a quick visit to the Arch of Triumph. It’s one thing we’d not yet done and Liz’s friend Milena was still in town so we got to do it together which made it extra special.

Timo had been wanting a selfie stick and the cheapest place to get them is from street vendors, so before heading back out of town we walked to the Eiffel tower and he got himself a bright green selfie stick! We are now one of those families! 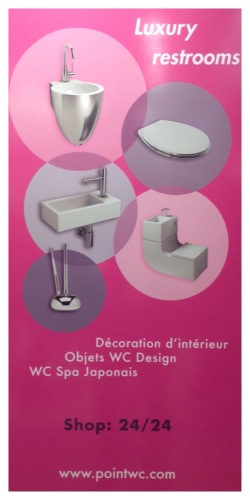 While in Paris we also saw: Place du Canada, a boat named New Brunswick and had a chance to use “luxury washroom” just off the street in a shopping galleria.  What constitutes Luxury restrooms you ask? According to the poster…

What they don’t publicize is the price. To use this restroom costs roughly $2.50 as opposed to the $1 average for public restrooms.

ummm…. our need wasn’t that pressing!
We’ll never know just how luxurious they are!

Thanks for following our adventures.
Whenever you think of us, please pray that God builds a great church in western France!