Does “STM/AIM Q&A” mean anything to you?
Probably not… so let me explain in a nutshell:

One of the things that I want to do with these STMM posts is to answer questions that I’ve either (a) asked personally or (b) been asked by others. END_OF_DOCUMENT_TOKEN_TO_BE_REPLACED

So you want to be involved in short term missions (STM)… Yours is a noble aspiration.

NOTE:
Today’s post is a long one so be sure you’ve got
an extra-large cup of coffee to wash it down… Enjoy!

END_OF_DOCUMENT_TOKEN_TO_BE_REPLACED

I realized that I did something last week that I’d not done a terribly great deal up to this point… I peeled back the layers a bit.

END_OF_DOCUMENT_TOKEN_TO_BE_REPLACED

I was recently asked a question and thought that the answer might benefit others who find themselves confident that God is calling them to short-term missions involvement, but they’re perhaps not yet quite sure where.

I’m applying for short-term missions. Do I indicate the country that I’m feeling or is there only a list of certain countries that the organization is recruiting for?

END_OF_DOCUMENT_TOKEN_TO_BE_REPLACED

Well… I made my first visit to the Police station. …nothing major and they let me out after only 30 minutes later so all’s good!  🙂

END_OF_DOCUMENT_TOKEN_TO_BE_REPLACED

For some time now, I’ve been thinking about adding a new element to the blog and it’s finally found its place: I’m calling it “Short Term Missions Mondays.” END_OF_DOCUMENT_TOKEN_TO_BE_REPLACED

In a single post today, we’re going to go back to August 2015 as well as look into the future. Ready?  Let’s start off with what I’ll call the “a few years down the road” portion….

END_OF_DOCUMENT_TOKEN_TO_BE_REPLACED

So… you have visioned, prayed, applied and been accepted to serve as an AIMer. Now what?

Now you start the check list (…the dozen or so checklists, if you’re anything like me), you know the one… the “I-have-so-many-things-to-do-and-I-don’t-know-where-to-start” checklist.

See… I knew you had it too. END_OF_DOCUMENT_TOKEN_TO_BE_REPLACED

Since we’d done a fair bit of visiting over the past week, we opted for a quiet New Year’s Eve as a family watching Mary Poppins (since we forgot to bring “the Sound of Music” with us).

We spent New Year’s Day preparing a nice meal that we would share with friends from the community… complete with foie gras, leek soup, duck and Italian panettone, topped off with a game of turkey foot over coffee.  Lovely way to begin the new year & Liz outdid herself as the hostess with the mostest.

Tomorrow at church we’ll be kicking off the new year with a fresh call to grow in the Lord and reach out beyond our walls to those around us.

We’ve purchased calendars for each of our church members with a daily Bible verses to help each one discover some of the major themes of scripture. In addition though, we’ve also given everyone a second, gift-wrapped calendar that they can in turn give to a friend that they’ve been praying for. The goal… to bring others closer to Christ. Please keep this particular outreach in prayer this week.

Many of you know that our missionaries return to France in March – six months ahead of schedule thanks to #IAmGlobal. That being said, we’d like to continue on here for a while, working with them after their return.

Need: While on furlough, their budget covered several of our expenses which, when they return, will become our responsibility, increasing the amount of required monthly financial support.

I’ve put together the following 3-min video to outline “our Beginnings, our First Year and beyond.” It will generally reside elsewhere on the site, but I wanted to give you a sneak peak at it first.
.

In the video I mentioned a special newsletter and article as my thanks for subscribing to the newsletter; spreading & building awareness.  Here’s a quick overview:

I credit my current involvement in ministry to extensive Short Term Missions (STM) involvement beginning in youth. Missions truly changed my life. In this 6-page eBooklet, I detail:

If you want to see young people impact the world and be impacted by Short Term Missions, this booklet will give you an overview of what’s possible.

This 4-page eBooklet is simply a quick overview of the Top 15 moments of Ministry involvement and Family Life during our first eleven months as AIMers (or volunteer missionaries) here in France.

Both are .PDF documents, optimized for reading on your iPad, tablet or computer, but could be printed as well.
..

How can I get them?

Both of these eBooklets are my way of thanking subscribers to our Newsletter. If you’d like to receive them, simply click here to subscribe and you’ll immediately receive download links via email. (Newsletters are published bi-monthly or monthly at the most – so don’t worry, I won’t flood your inbox.)

In the month of March, our expenses will more than double. Below is a minimum breakdown of what we’ll need in new monthly financial partners:

If you or your church are not currently supporting us financially, would you consider doing so this month? Click Here for instructions on partnering with us.

Thank you for stopping by today. God bless you richly and help both of us to become more and more like him. Happy New Year! 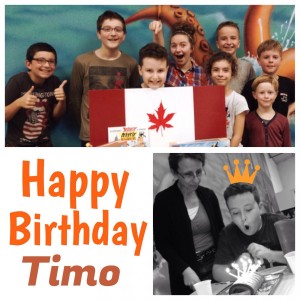 … before I do or say one more thing, I have to stop and say…

…to my number one baker and “French Painter”… Timo.

Since arriving in France he has become an incredible drummer, taken great interest in baking, cooking and making authentic Italian pizza crust from scratch (he rocks). People love being around him and he’s making more friends than he probably realizes. He’s a JOY and we are so proud of this AIMKid!

Today is the actual day but we celebrated with friends earlier in the week because dad teaches at the Bible School today. Incidentally, he is holding a home-made backboard for the basketball net that we picked up in the summer. Our next door neighbour made it for him… how cool is that!? 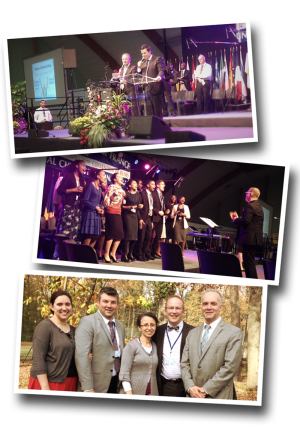 Last weekend we were in Melun for the national youth convention (YC). It actually doubles, somewhat, as a European YC since there were people there from Belgium, Holland, Denmark, Estonia, the UK and all over France.

Rev. Chadwick King (Santa Rosa, CA) was the guest speaker and was tremendous. In the top picture you’ll see that I was translating for Bro. King. What an honour to help in the area of translation.

Not only did our kids enjoy being around other youth, but we had a couple of young people with us who were there for the first time. They too enjoyed it much and are already excited to come back next year. Praying at the altar, they were so hungry for the presence of God and the gift of the Holy Ghost: I’ve said it before God is doing a great work in our Sunday School kids!  Thank you Jesus.

We’d been looking forward to meeting fellow AIMers Baron & Jen Carson of Bosier City, Louisiana and it happened at YC (see pic above). They assist at the church in Dordrecht Holland and what a pleasure to serve on AIM with such great folks as them.

If you have an interest in, or burden for, Holland… check out their site: HopeforHolland.com, and consider partnering with them. 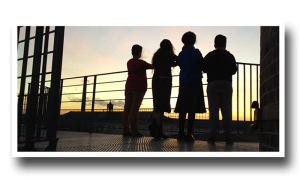 After a busy YC weekend, followed by a 3.5hr drive back home Sunday night, Monday was a low-key day at home for the most part. Only at around supper time did the whole family venture out together to watch the sunset from the old smoke-stacks at la Manufacture downtown, normally a great vantage point. With winter time now in effect and the sun moving quickly, we actually arrived just after it had set, but still enjoyed getting out in the fresh air together.

We weren’t alone up there however, there happened to be another family… a mom & her two boys who spoke English. We struck up a conversation with them which lasted nearly an hour and a half. They too were an ex-pat family who’d moved to Châtellerault from Melbourne Australia. They’d been here for roughly a year and a half and were homeschooling their kids until just recently when they’d enrolled them in school. In short… there were tons of parallels between our two families (right down to having left behind a flock of backyard chickens!!).

We may have thought we were going down there for a sunset, but I think it was definitely a God-moment and the real purpose of our jaunt down there was for that meet-up. Thank you Lord!

I didn’t want to lead off with this, because Timo & all the good things that God is doing take priority.

Nonetheless, many of you reading this will have already heard about the shootings in Paris last night.  As I write this 129 people died in shootings at a famous nightclub, a restaurant and, incredibly the national soccer stadium where France was playing an exhibition game against Germany with the president in attendance.  As a result the city of Paris will largely be “closed for business” today: any place where crowds can gather.  It’s likely not a coincidence, but France resumed passport control at the borders yesterday in the lead-up to the global environmental conference to begin in a few weeks.

Know this: Although I’m in the Paris region for Bible School, I’m some 50km from downtown so quite sheltered. Thank you for those that have emailed, tweeted or inboxed through Facebook.

Do this:  #PrayForParis #PrayForFrance … there is perhaps no day when it is more appropriate to place a call out for prayer for this country. Once again, the nation has been hit at its heart and will be seeking solace. We know the peace-giver.

Everything that happens has SOME-thing to do with the Kingdom of God…pray that God helps us recognize and seize each opportunity in the coming days & weeks.